Here’s a fun fact to start off this blog post: my dad is Canadian. He was born there to my Welsh grandparents, and even though he was raised in my hometown in Wales, he now works and lives in Calgary, Alberta. So when he asked if we wanted to head out and visit for our summer holiday this year, I immediately said yes and got to following every single travel blogger who had ever visited Canada on the planet! 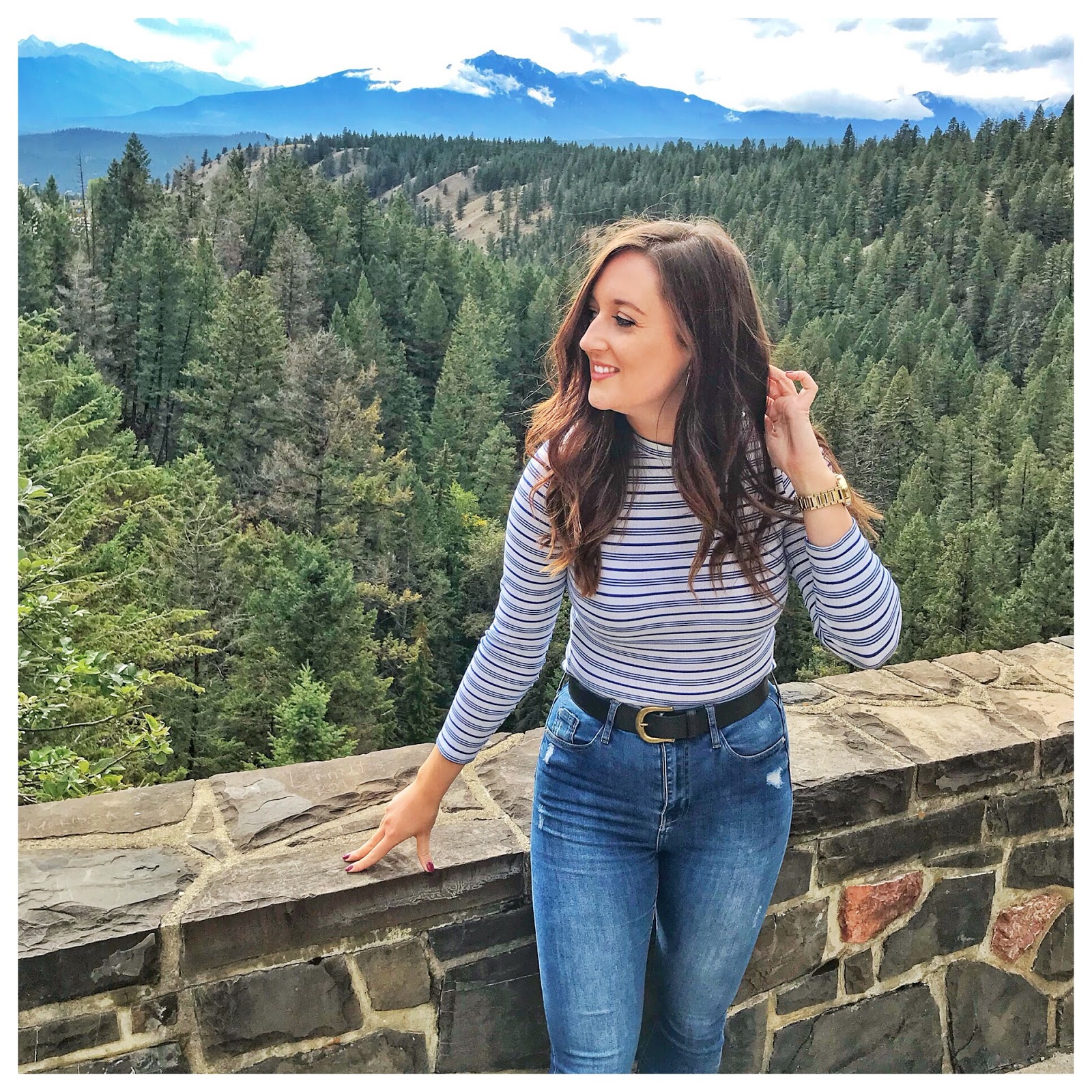 I’d been to Canada before, when I was a young sixteen-year-old who would rather be at home surrounded by her friends and spending time with her (now ex) boyfriend. And I kick myself every time I think of how amazing an opportunity it was and how much I took it for granted. So this year I was determined to do my research, to take every opportunity I could, to see and experience as much as I could, and in 10 days I did just that.

The first part of our trip was spent in the city of Calgary. The city is about 80km east from the start of the Canadian Rockies (I’ll get onto this later!), and we flew in from Gatwick and stayed in my dad’s condo. I have to say that on arrival I was suprised by how flat Alberta was. Having stayed in Vancouver before, where there are beautiful mountains and which is right by the coast, it was a stark contrast, but very pretty nonetheless. 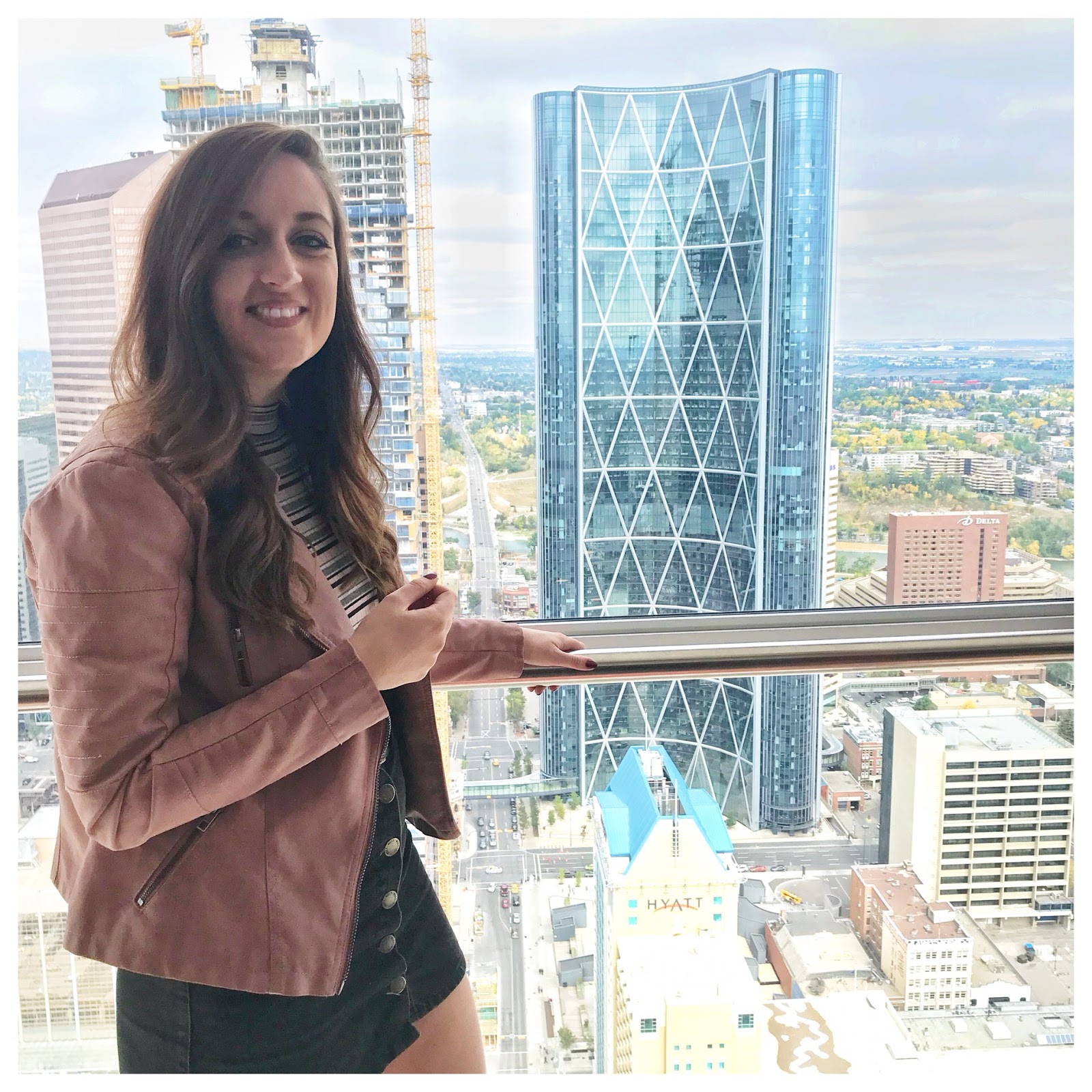 The weather when we arrived was lovely and warm; the sun was shining and we strolled from my dad’s place to Inglewood to grab some supper before crashing out before 8pm due to jet lag. However, the next day was spent exploring Downtown Calgary, climbing (okay, taking the elevator) up to the Calgary Tower to take in all the glorious views, and grabbing brunch, obv.

If you’re ever in Calgary, you should definitely climb the Calgary Tower. It was built to honour Canada’s centennial, and for 18 Canadian dollars you can visit its Observation Deck, which has a 360-degree view of the city where you can see the Canadian Rockies, the prairies and even the bobsled where they filmed Cool Runnings (my dad proudly told me that!). It wasn’t the clearest day when we visited, but it was still pretty awesome. Give me a good city view and I’m happy! 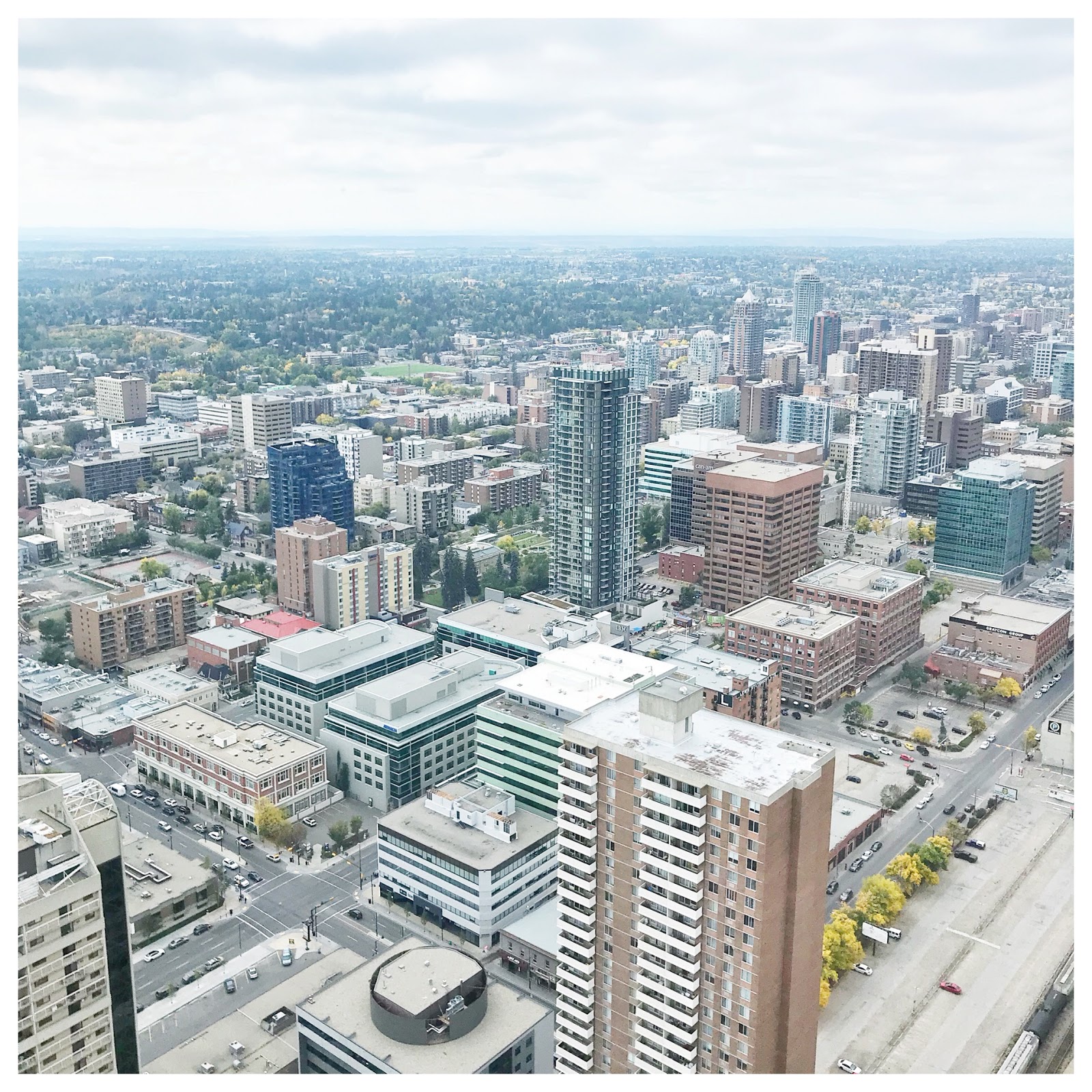 I found Calgary itself quite quiet. It may be because we visited Downtown on the weekend, but it didn’t have the hustle and bustle of other large cities I’ve visited. However, the food was great, the people were lovely and friendly, and there’s a great shopping mall in the city centre, as well as Chinooks just outside, if you fancy a mooch around.

The most-part of our trip was spent roadtripping through the Canadian Rockies around Alberta and into the national parks of British Columbia, and I can honestly say it was the most amazing trip I’ve ever been on. 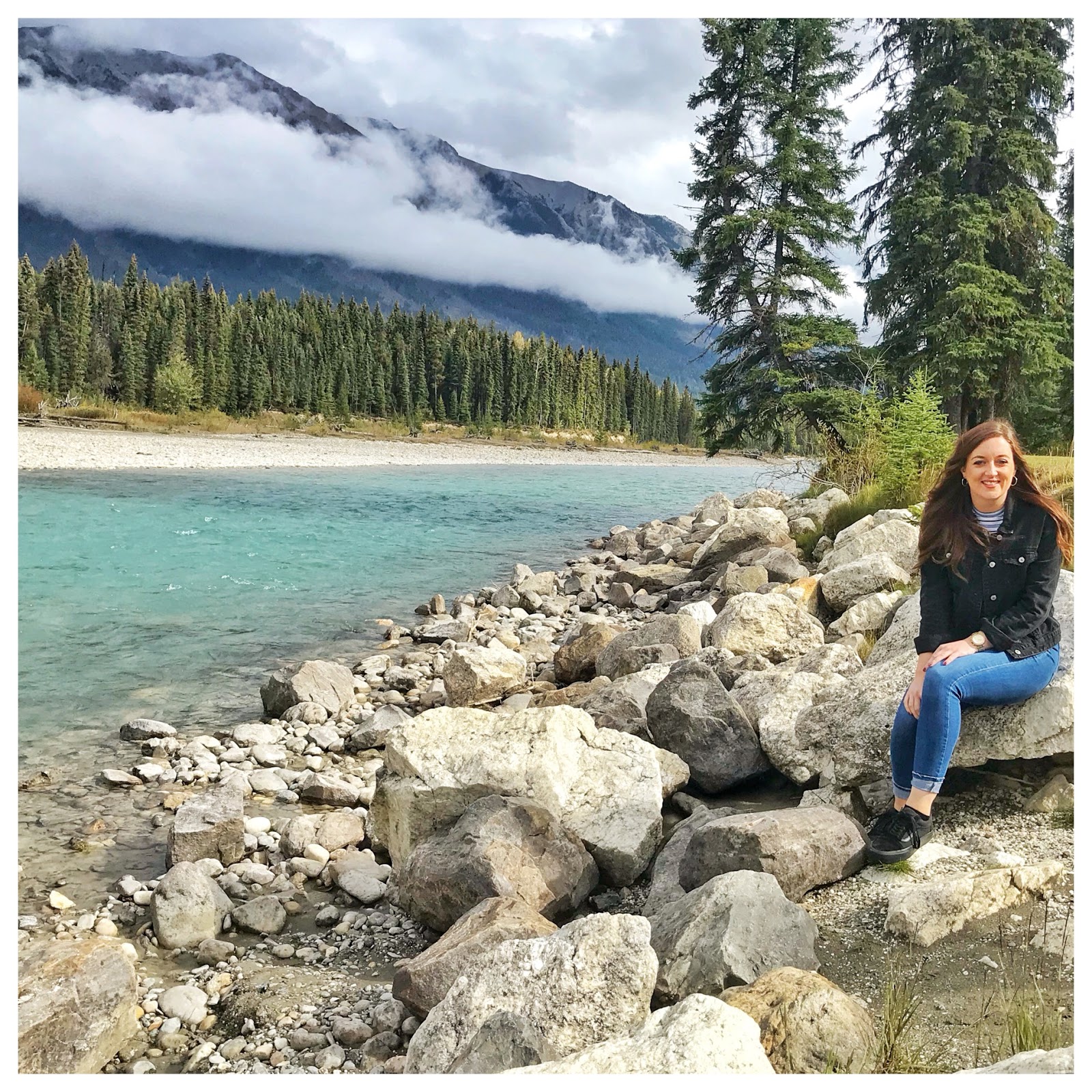 We started our trip by visitng the tourist ski town of Banff, which sits inside Banff National Park. I was so excited to visit Banff. In the lead up to our trip I’d seen endless pictures and two of my closest friends from primary school have also been living there for the past few months so it meant I’d be able to see them too, which was seriously lovely. The national park itself is absolutely stunning; you are surrounded by towering mountains, bright blue lakes, and lush forests; I spotted a moose! (sadly what I thought was a baby bear was actually a big black dog); and I was completely in awe of how beautiful it was. Everywhere you look the snow-topped Canadian Rockies can be seen peaking above the fluffy, white clouds.

Sadly both times we visited Banff town (both there and on the way back) the weather was abysmal. We had fog and torrential rain on the first day, and on the way back we had snow, but the town itself was gorgeous. There is a very touristy feel, and there are lots of lovely shops, coffee houses, and the smell of pastries fill the street. We only spent an hour or so at Banff each way as it was a stop-off point for our next destinations, but had we had longer and the weather was better I would have loved to go on the gondolas and do some hiking. 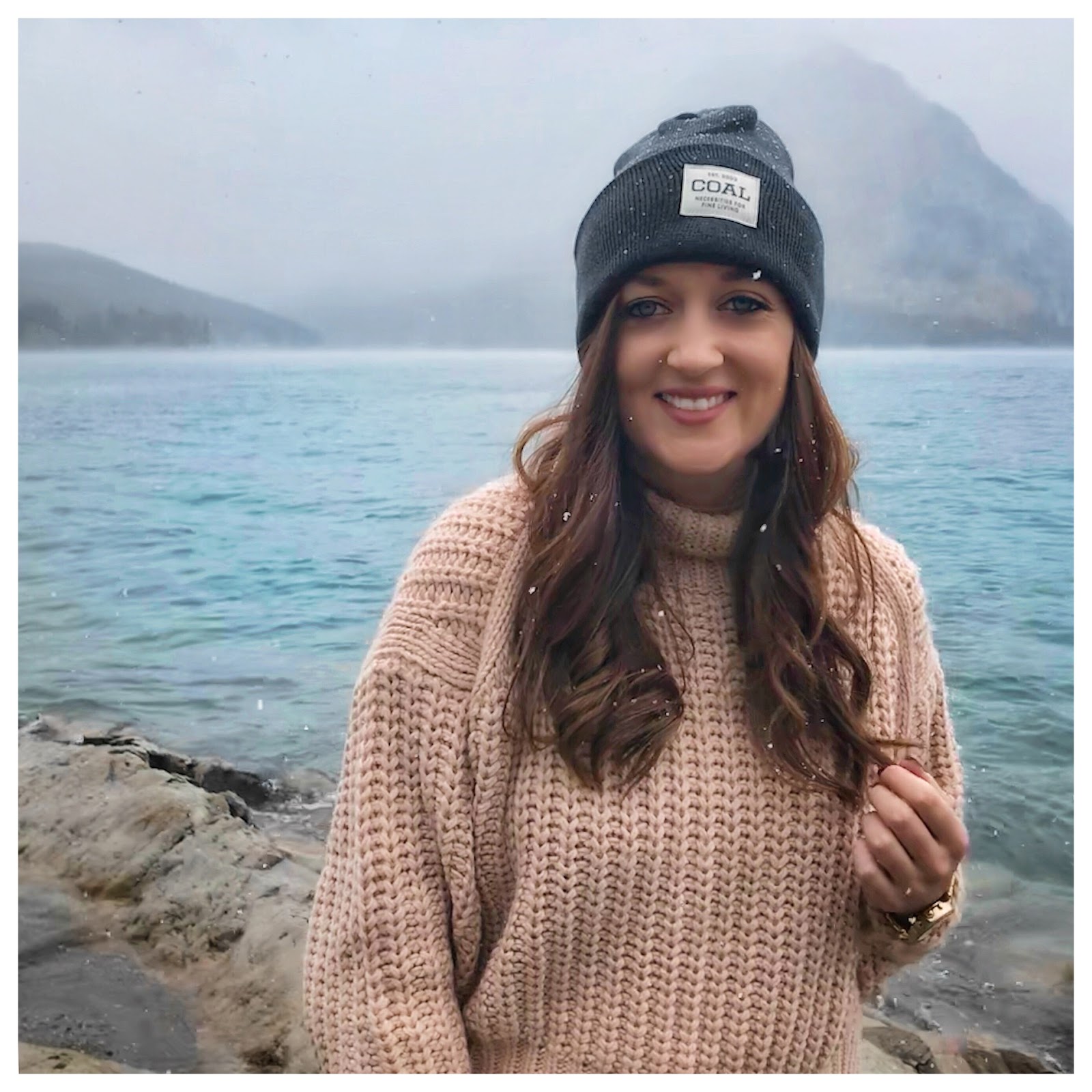 We did, however, stop off at Lake Minnewanka on the way home for a quick look around. It was snowing, but still absolutely beautiful, and it’s a must-visit if you’re ever in Banff or Canmore. It’s a glacial lake that’s just 5km from Banff town, and in the summer months there are power boat trips and plenty of hiking opportunities. I also read that if the conditions are right you can see the Northern Lights sometimes during the winter. I mean, how incredible would that be?!

For three nights/four days we stayed at a gorgeous little resort called Panorama, but to get there after visiting Banff we drove through Kootenay and Yoho National Parks to the province of British Columbia. The journey there was absolutely stunning. We drove through mountain passages, bright blue rivers bubble alongside the road (and yes, they really are that blue!), emerald green lakes randomly pop up out of nowhere, and your surrounded by trees and nature. 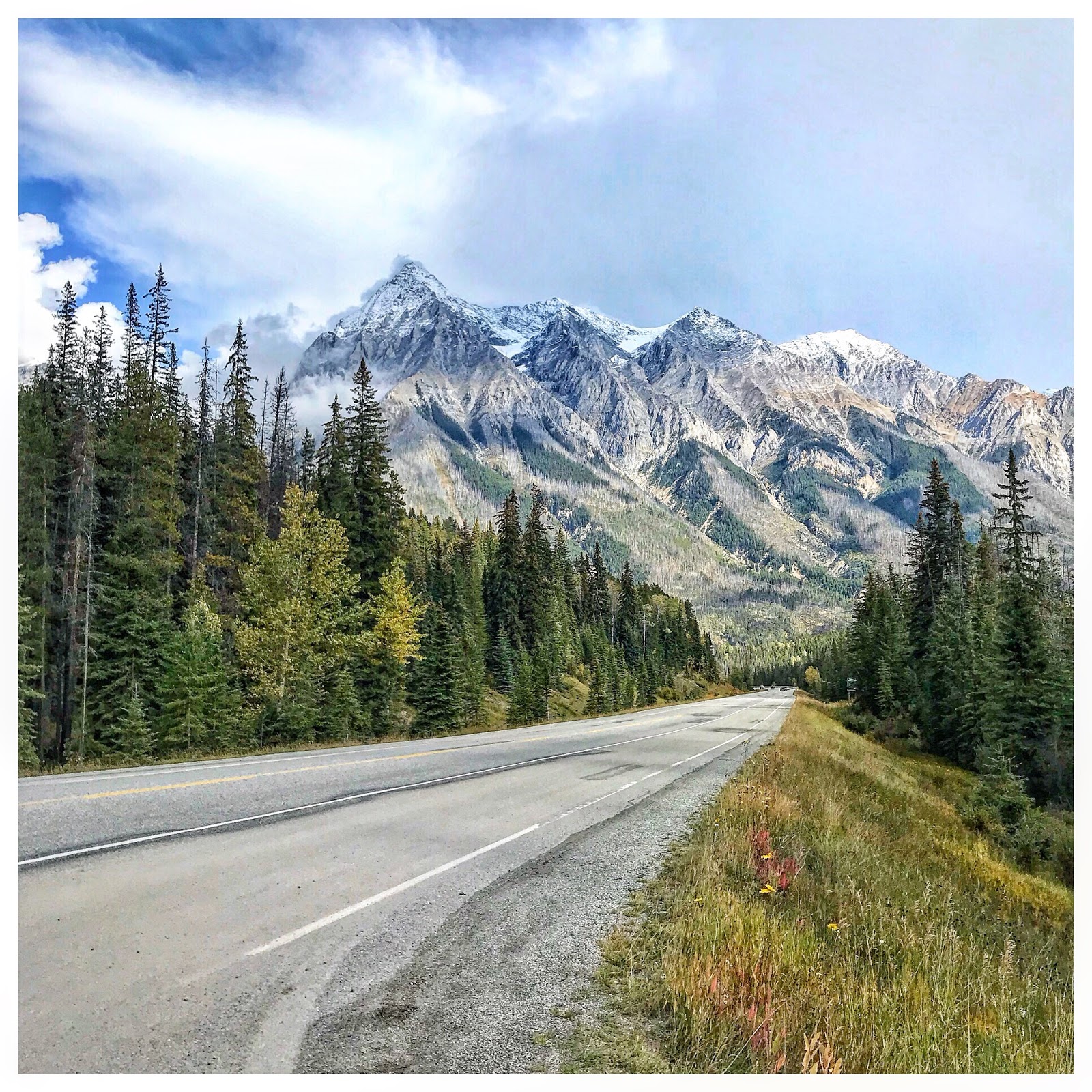 Genuinely, a lot of the time I had to pinch myself to confirm that everything I saw in Canada was real, and being dwarfed by the amazing sights around you put a lot of things into perspective. 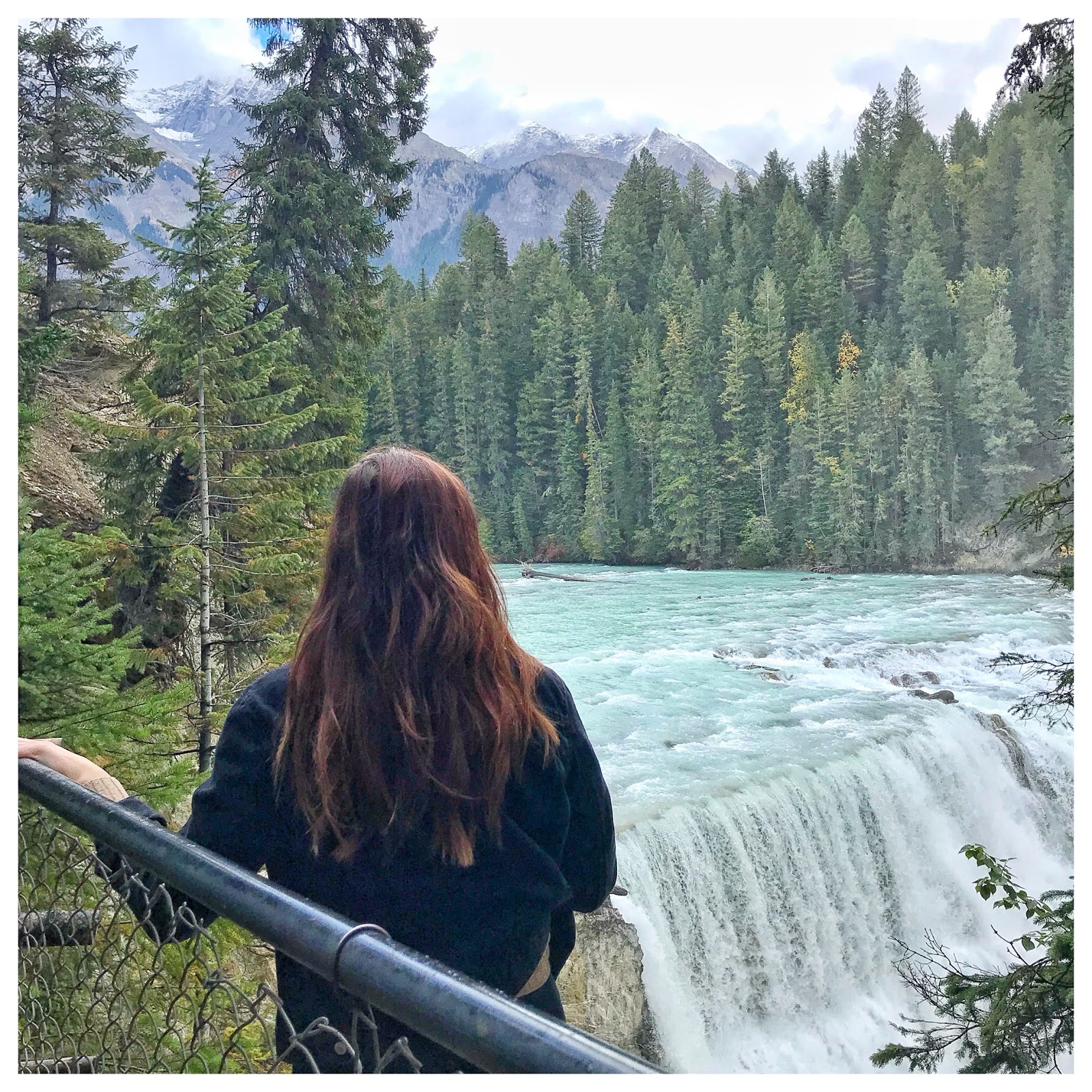 My favourite stop along our way to Panorama, however, had to be at Wapta Falls. To reach the falls, located in Yoho National Park, BC, you had to walk about 2km from the car through the forest. We passed lots of friendly hikers along the way and the path itself wasn’t very difficult, and the view when you reached the falls was absolutely incredible. I mean, I don’t think I’ve seen anything so amazing, like ever. 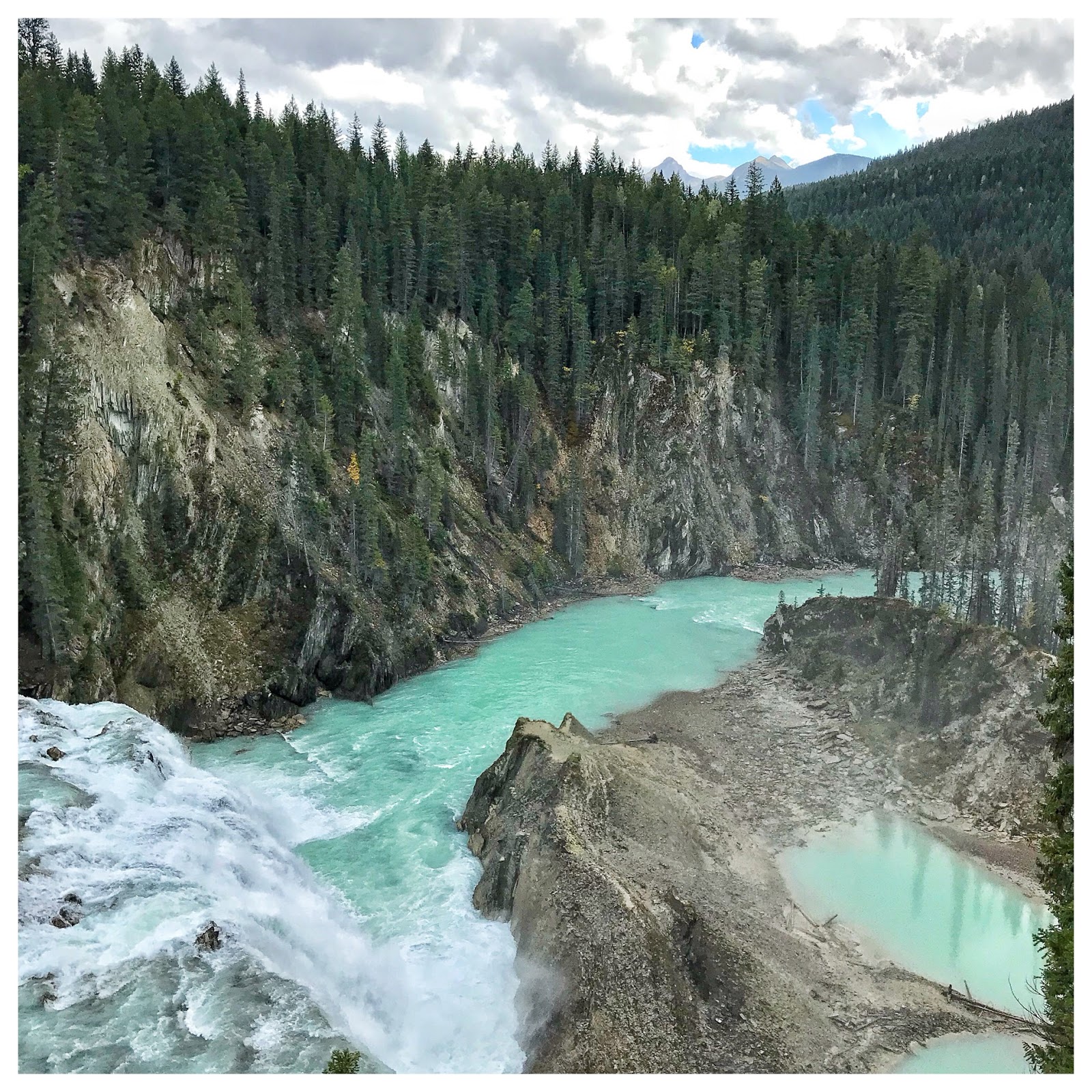 We stayed in the cutest little ski resort of Panorama, which is a 30 minute drive from Lake Windermere and the town of Invermere. Our chalet was smack bang in the middle of the mountains, with a creek winding right through the middle and beautiful animals all around. It was a really sweet place and was super quiet and peaceful, seeing as we were visiting in the off season. 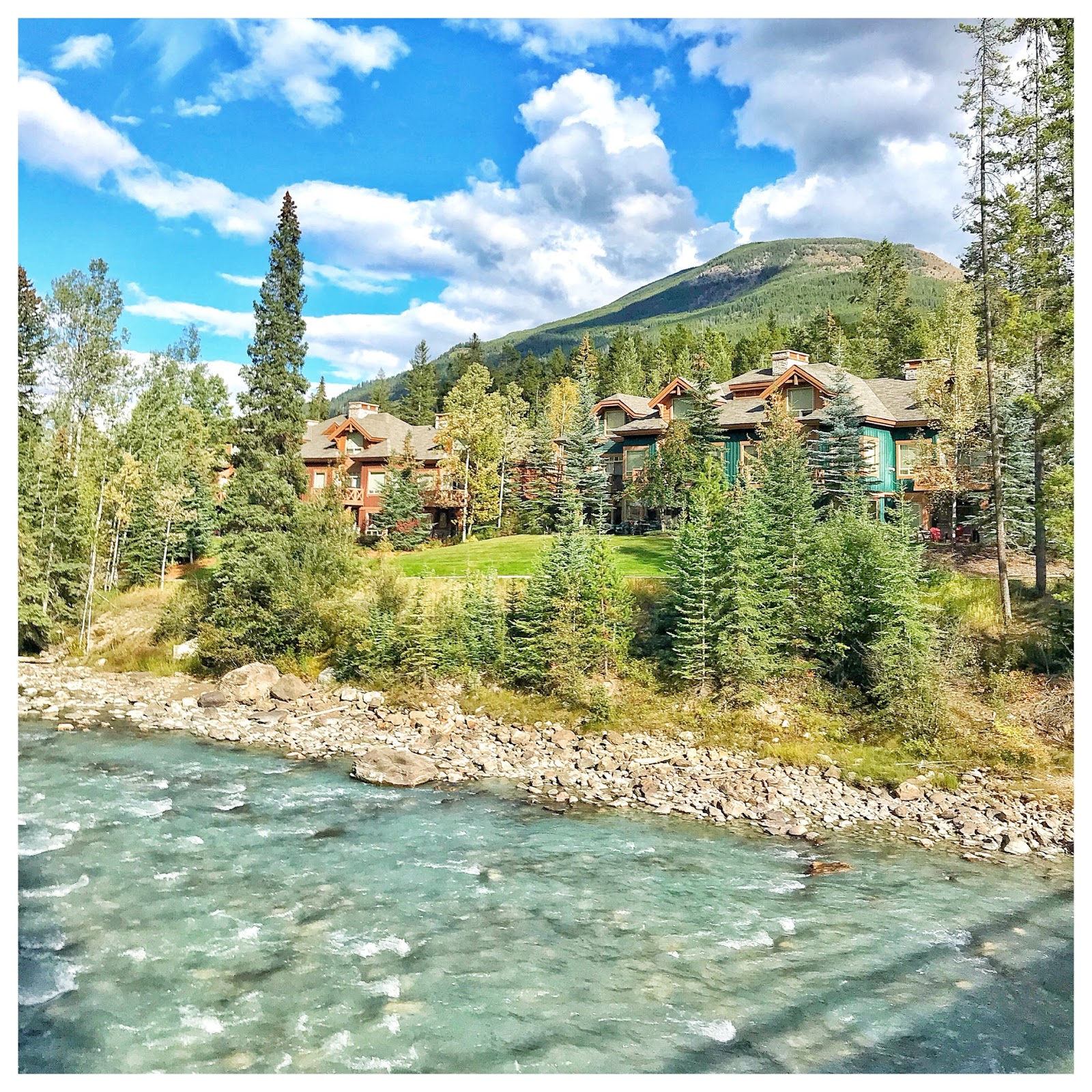 I can imagine it’s a seriously fun place to be in the mid-winter though when everyone is skiing and having a good time! I loved going to sleep whilst listening to the rain, or being cosied inside reading a book with a view of the mountains when I looked out of the window. It was seriously relaxing and just what I needed after a crazy few months. 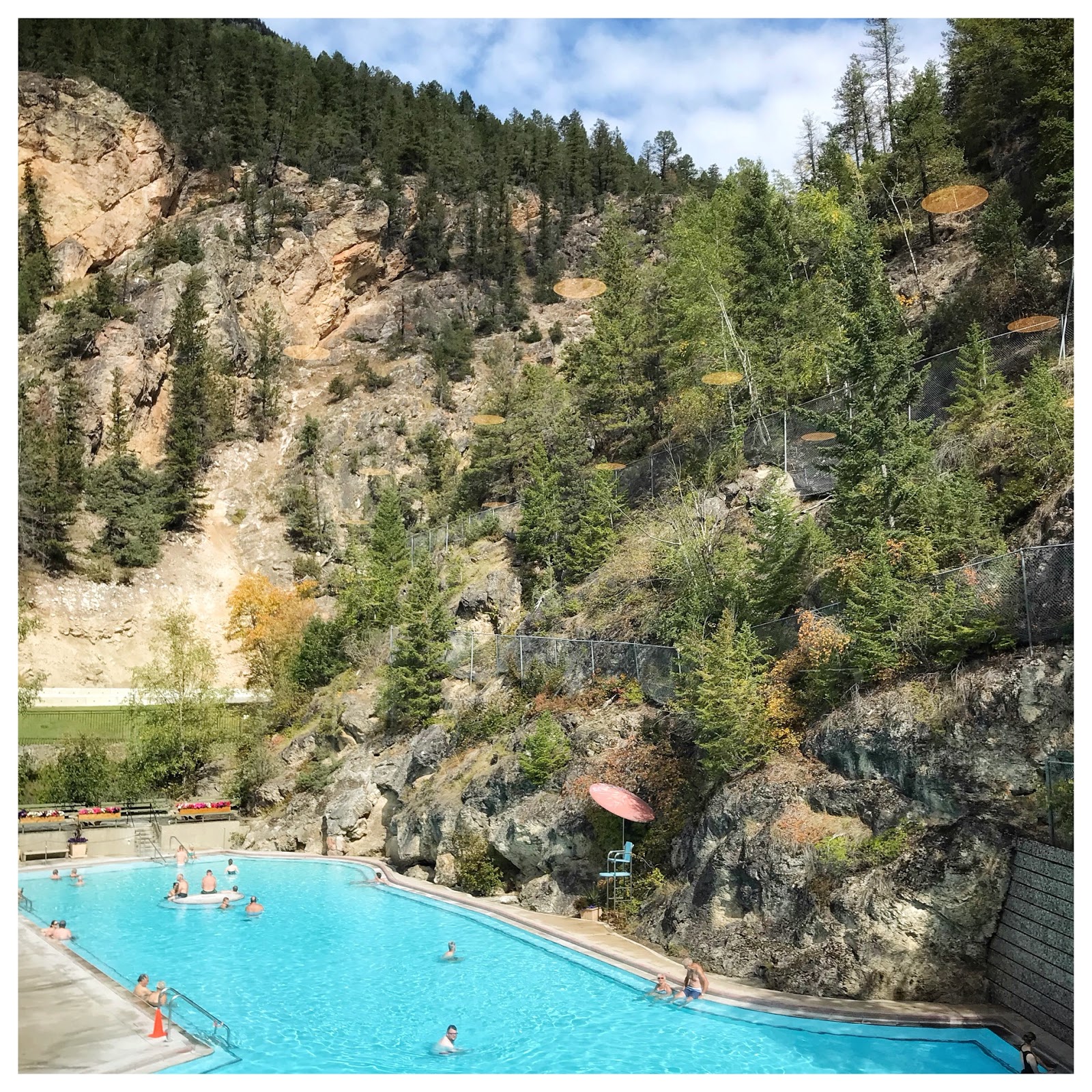 We also spent one morning relaxing at Radium Hot Springs, which is a village based at the edge of Kootenay National Park and is a 45 minute or so drive from Panorama. We visited the world famous Radium Hot Springs Mineral Pools, which are made up of a series of super warm swimming pools carved into the natural rock face. It was so lovely to relax in the hot water while breathing in the fresh mountain air. It even rained while we were there which only added to the appeal.

And last, but certainly not least, no trip to Banff would be complete without a visit to Lake Louise. It’s the iconic image of Canada. You see it on tourism guides, in magazines, it’s all over merchandise, and it is truly insane. It’s a glacial, deep bluey-green, almost turquoise lake situated in Banff National Park, where the water is incredibly still, there are beautiful mountains all around and it’s overlooked by a luxury chateau. I’ve honestly never seen anything so breathtaking, ever. 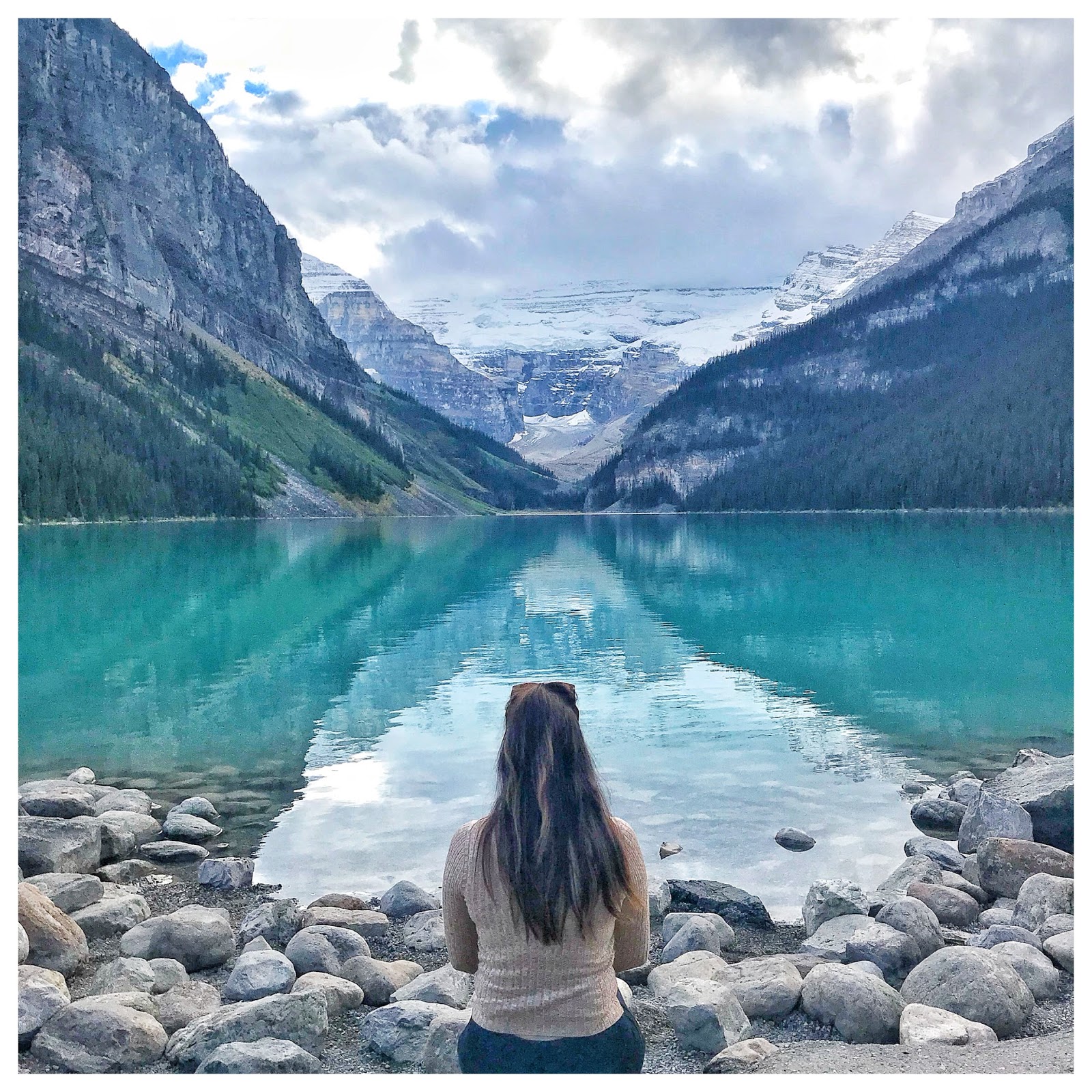 It’s beautiful colour comes from rock flour that is carried into the lake by melt water from the glaciers, and there is the opportunity to rent canoes to boat along the lake and there are plenty of hikes nearby too. We almost didn’t get to visit the lake as we’d missed the last shuttle bus up from the hamlet that you first arrive at when you get to Lake Louise, which has a tourist information centre and several shops and restaurants. The carpark to drive there yourself was also full, but we hung around and as it got a little later and the carpark cleared out a bit, we were able to drive up there ourselves to experience this amazing sight of natural beauty. You simply must visit if you’re ever in Banff. 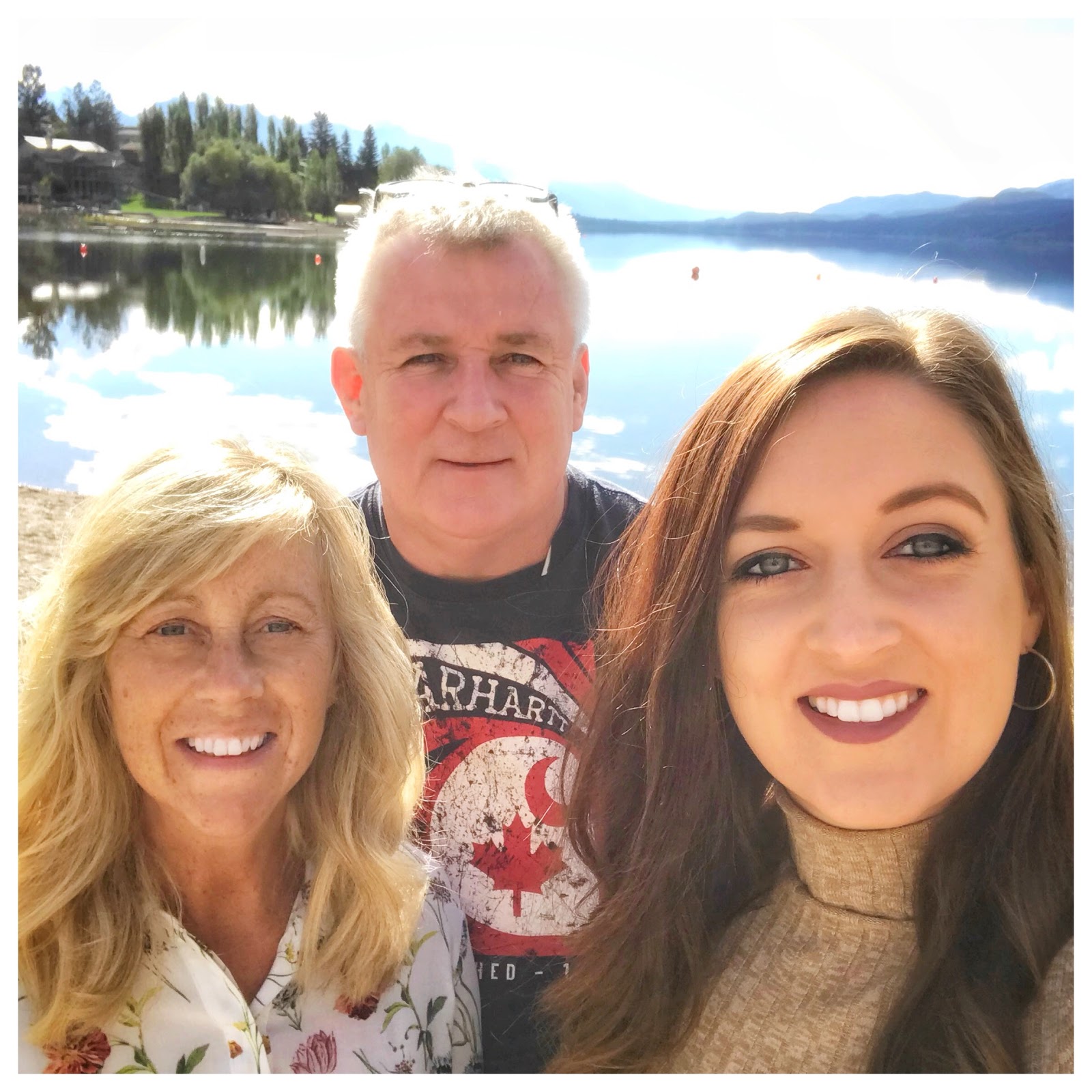 My trip to Canada was honestly the most amazing, inspiring and wonderful trip I have been on in some time, possibly ever. I’m incredibly grateful to my parents for all they did for me, and to my dad especially for organising the trip and for getting us out to Canada in the first place. It reiterated to me that I really must make more time for travel, which is something I have been wanting to do for some time now, and now that I’m settled in work and in my flat, I’m going to do just that. There’s a big wide out there, and I want to see it all.