If you’re thinking of heading on a quick getaway or city break in the next few months then I can’t recommend Edinburgh enough. Dan and I returned from a little romantic holiday just last night and I’m already itching to go back. The beautiful cobbled streets, the towering buildings, the (questionably) melodic harmonies of bagpipes floating through the air. It was the most amazing break and just what I needed after a seriously hectic few weeks (read about that here). 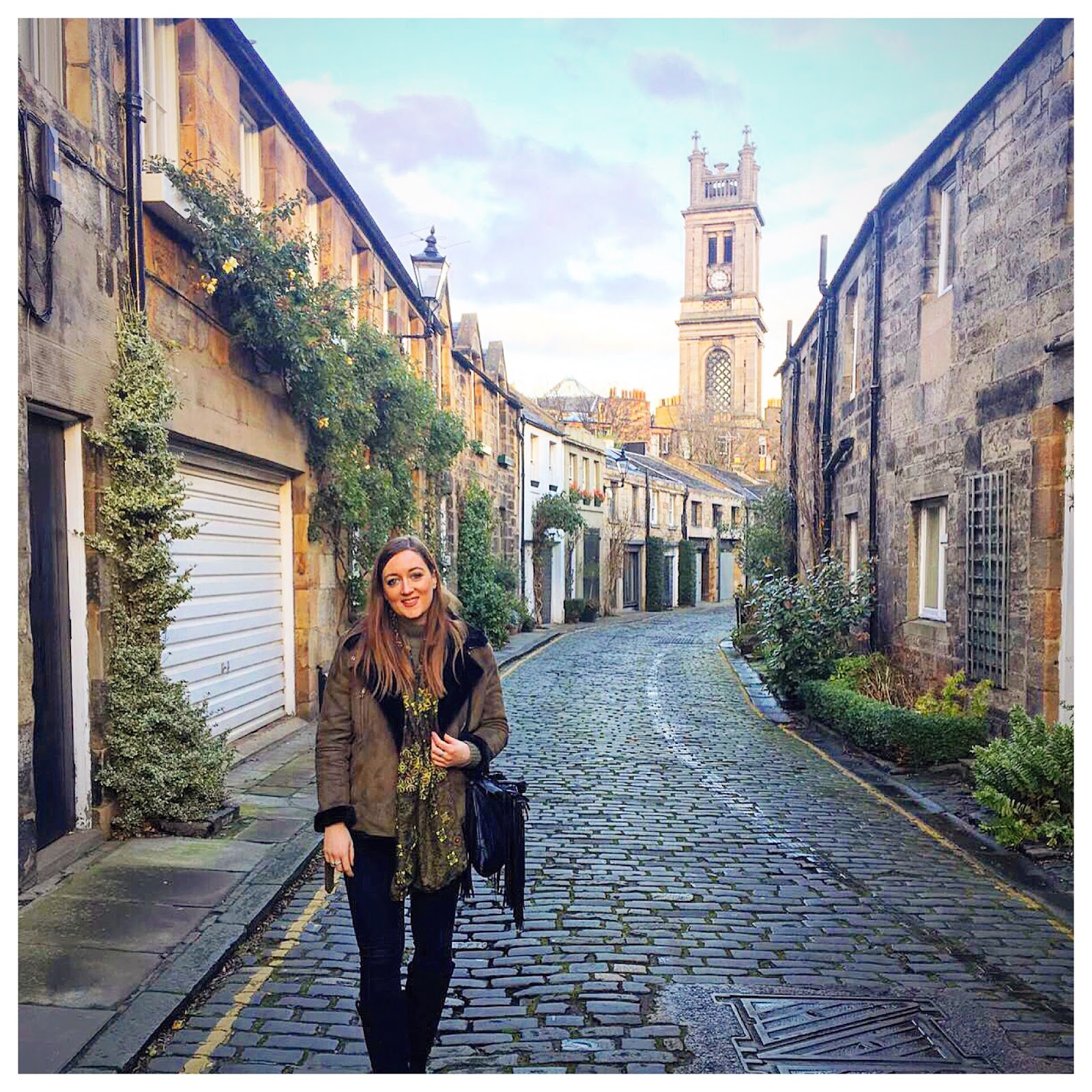 I’ll be honest, I didn’t know all that much about the Scottish capital before Dan booked our trip to Edinburgh for my 23rd birthday, but after doing a little research Dan had a list of things to do as long as my right arm, and we were super excited to go. We flew from Bristol (just an hour flight for which I slept the whole of the way there, even during the safety demonstration by the air hostesses!) and stayed at the Tune Hotel in Haymarket. This was a lovely hotel and just a fifteen minute walk along the main street from the city centre, opposite a tram stop and railway station and really close to pubs, shops and restaurants. I’d definitely recommend staying here. It was really comfortable, the staff were great and it was super cheap too – around £25 per night!

The city centre itself is split into two, separated by Princes Street, which is the main shopping street, and Princes Gardens, a beautiful expanse that was once a moat for Edinburgh castle, separates the “Old” and “New” town. The New Town lies to the North and features an amazing array of shops, while the Old Town, which is considered a World Heritage Site, to the South beautifully captures a magical feeling of times past. Edinburgh Castle stands proudly on a cliff overlooking New Town, and the cobbled streets are lined with beautiful old buildings and hidden alleyways, each with their own story to tell. 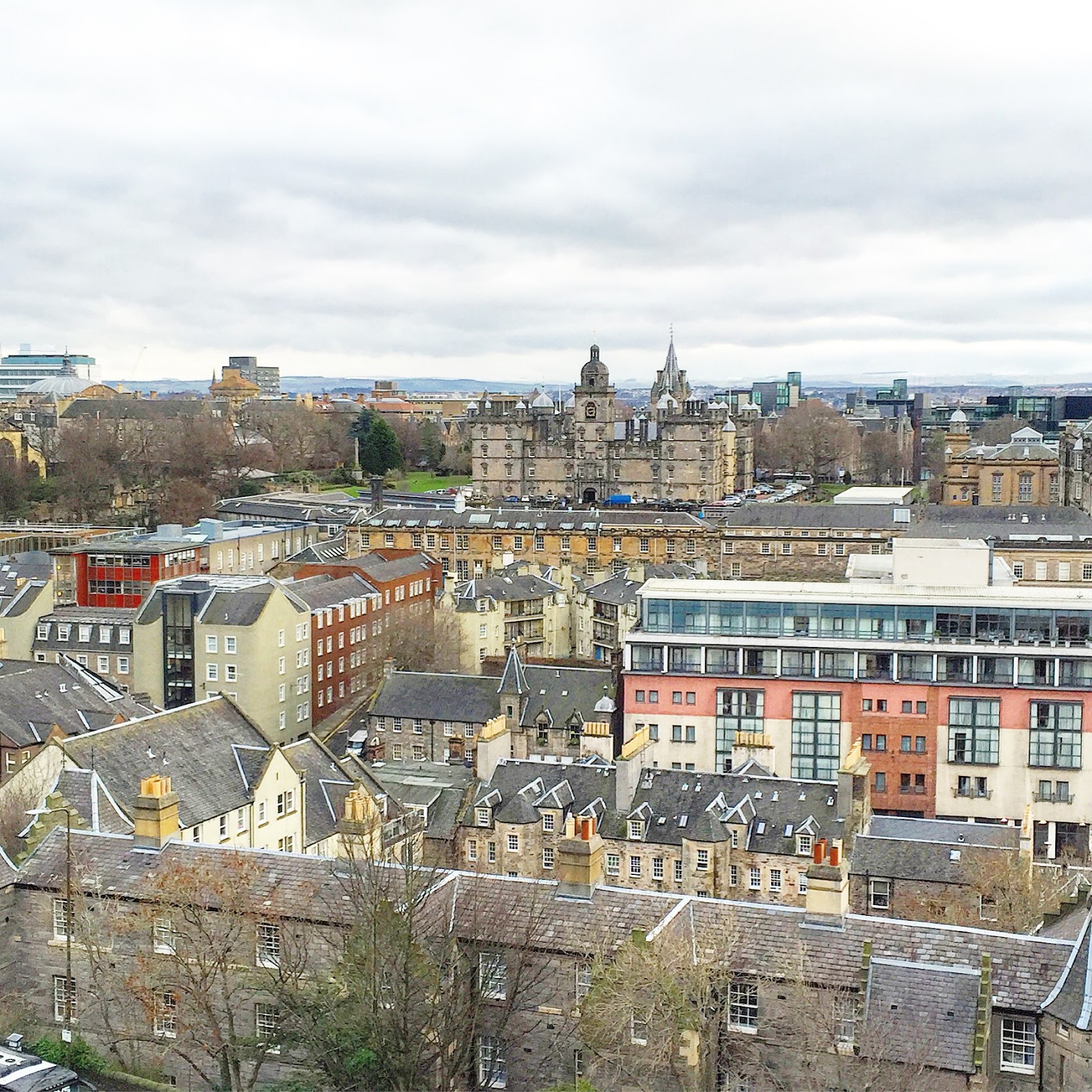 The city is also surrounded by natural beauty. Towering mountains and lochs can be found in Holyrood Park – yep, that’s right, a mountainous city park! – and to the North and East is the sea. It really doesn’t feel like a city at all; it’s like a gorgeously crafted countryside village, and there is a lovely relaxed atmosphere too. Not once did I feel like we had to rush, which was a welcome change from the hustle and bustle of London. It made me realise that perhaps the “Big Smoke” is a little too much for me; living in a sleepy city like Edinburgh, where everyone is friendly and you’re surrounded by countryside is far more appealing.

Our first day started with a 4am wakeup call to catch our flight, but that didn’t stop us from cramming in pretty much all of the touristy stuff possible in 24 hours. We started by walking through Princes Gardens and up to the stunning Edinburgh Castle. The views from the top really are a sight to behold – there’s an almost panoramic view of Edinburgh and all of its pretty buildings. We didn’t actually go into the castle as it’s priced at £16.50 each (a little steep for those of us without a huge budget) but the courtyard, or esplanade, just outside is the perfect place to grab some photos and to see the views. We also headed back on our following day and caught a striking sunset, really a breathtaking sight to be hold. 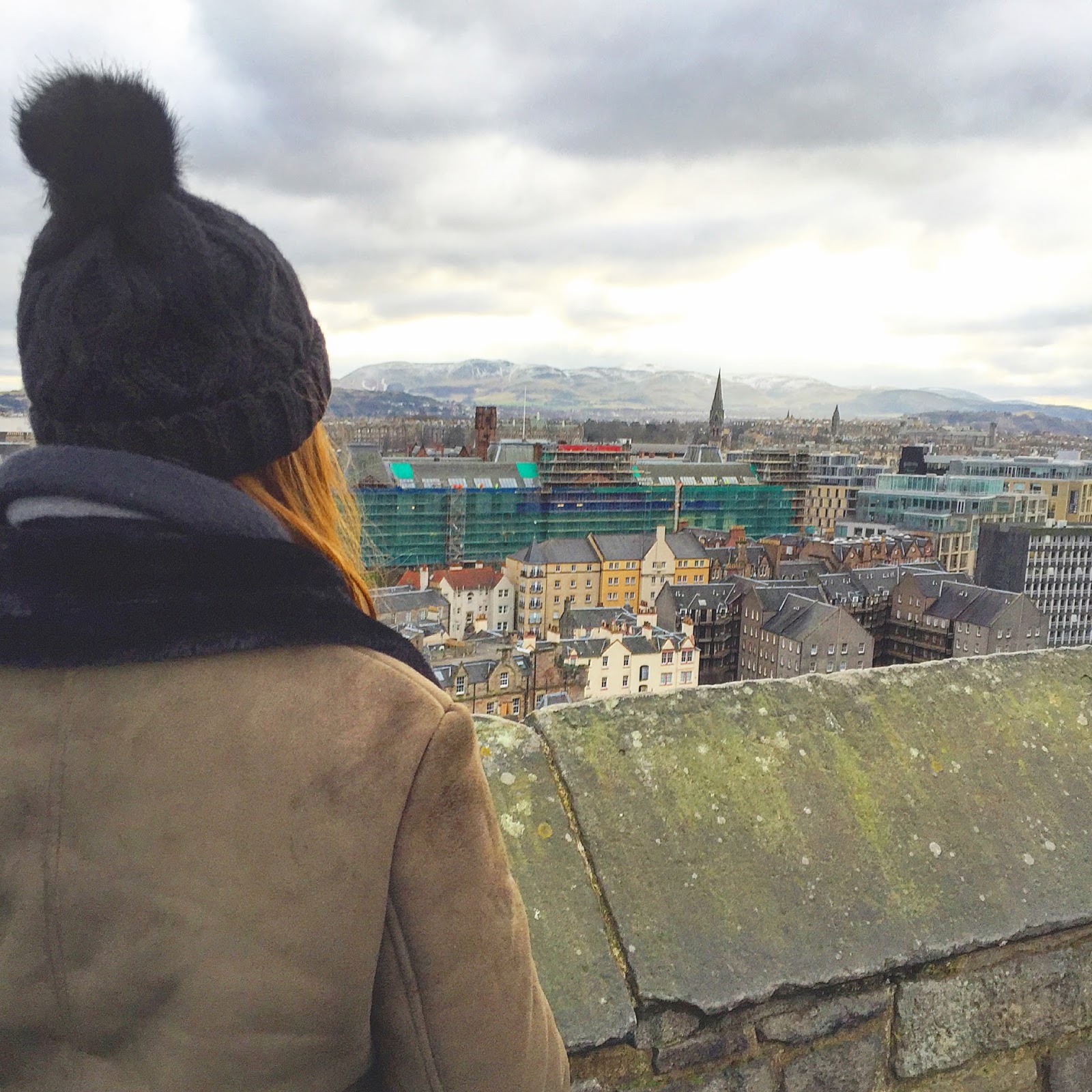 From there we continued along the Royal Mile. This is a mile-long road that goes straight through the Old Town connecting the Castle and Holyrood Park. There are lots of quirky shops, loads of Scottish bagpipers and also the beautiful St. Giles Cathedral. I’d definitely recommend going in there, no matter whether you’re religious or not. It’s just a really beautiful building, with a sense of peace and calm. We loved walking around and taking in the pretty windows and architecture. 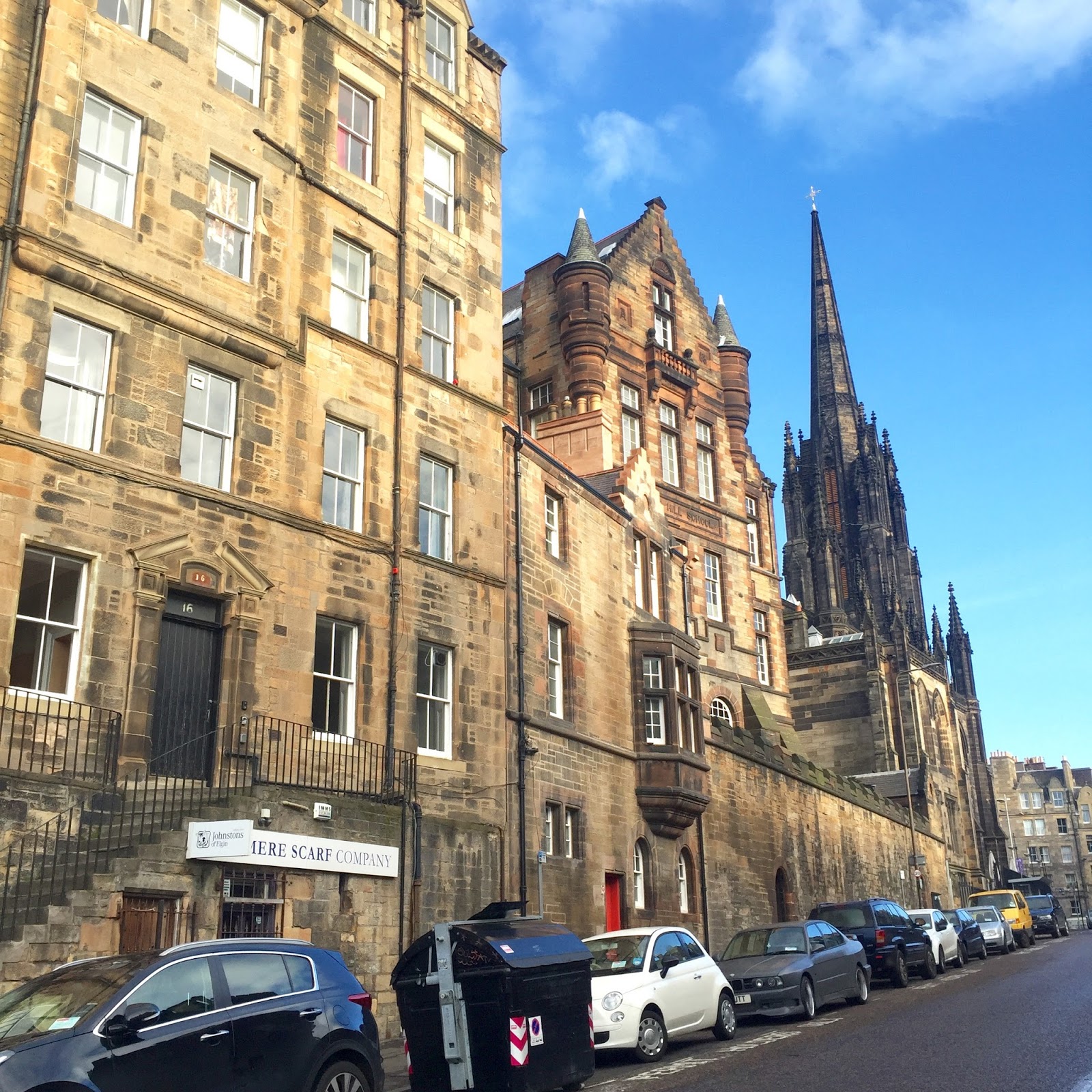 There are lots of coffee shops, both independent and chains, along the Royal Mile and on the streets off the main road, so you’ll be spoilt for choice when finding somewhere to have a quick break. We opted for Pret (standard) before making our way back towards the New Town, across South Bridge which heads over the main Edinburgh train station, and to Calton Hill. 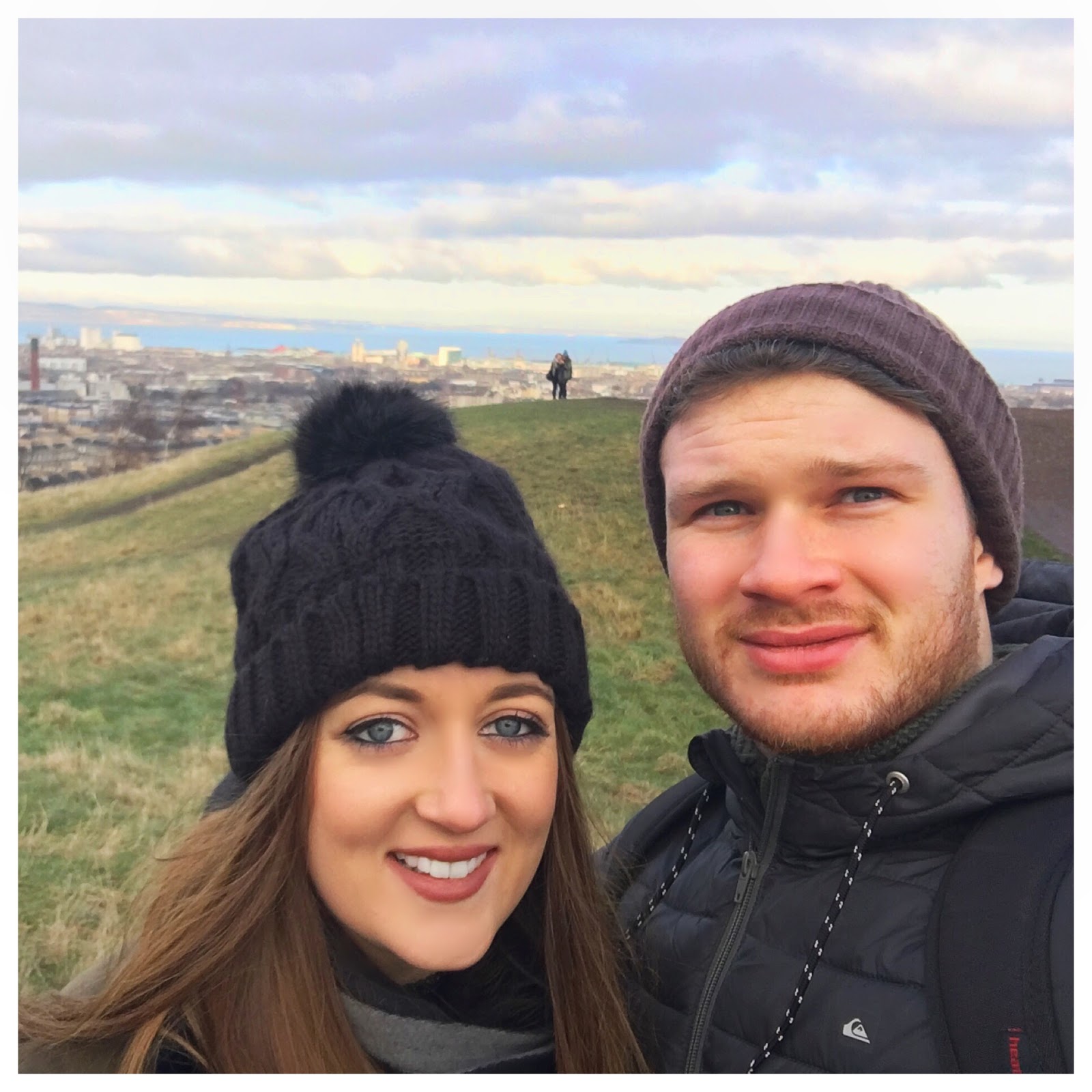 Calton Hill is situated on the very eastern side of Princes Street, and is also part of the World Heritage Site. It’s also home to a few of the city’s most iconic monuments, including the National Monument and Nelson Monument. The views from the top are so amazing. You can see miles and miles of beautiful Scottish landscape. There’s something so lovely about standing on a hilltop and looking out at the world around you. It makes you feel so small and your troubles become so insignificant to the vastness of the earth around you. I love taking a step back and appreciating life at times like these. 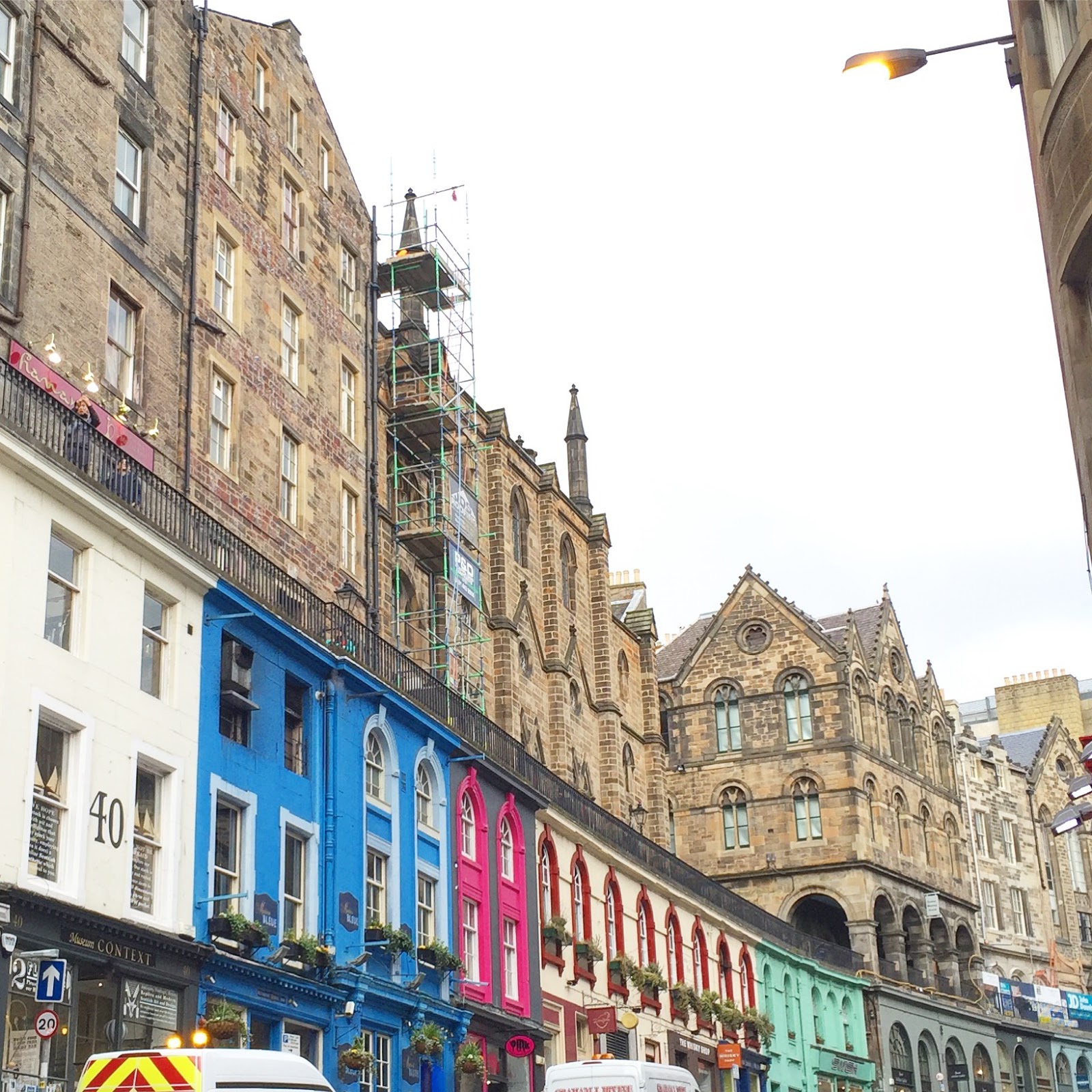 Our last stop on Day 1 was Victoria Street and Grass Market, which Dan had seen on Instagram and thought was a really pretty street that I’d like. He was right – the pavements are lined with brightly coloured shops, all housing cute little trinkets and many acting as mini museums. I love how every corner in Edinburgh is bright and colourful; a little feast for the eyes! I’d really love to go back in the summer to see the streets filled with festivities.

After a seriously long day, we finished the evening with some pasta at Prezzo before heading back to our hotel and crashing into bed for a good 12 hours. Not before joining Edinburgh’s Trump Protest though. It was really amazing to see people of all races, ages and backgrounds coming together to protest the #RefugeeBan. Our personal favourite protestors we two young kids, who were chanting “Trump’s A Grump” at the top of their lungs. I also noticed an older white woman explaining to a young black girl why it was important we came together in a stand against decisions like this. There was a feeling of love all around, which just reflected the city as a whole.

We woke up the next day to a bit of a gloomy, grey sky and spots of rain, but we were actually super lucky with the weather, despite a -3oC start on the Monday. This was the worst it got, and even then the drizzle passed after an hour or so. We headed back to the Old Town for a delicious Scottish fry-up. 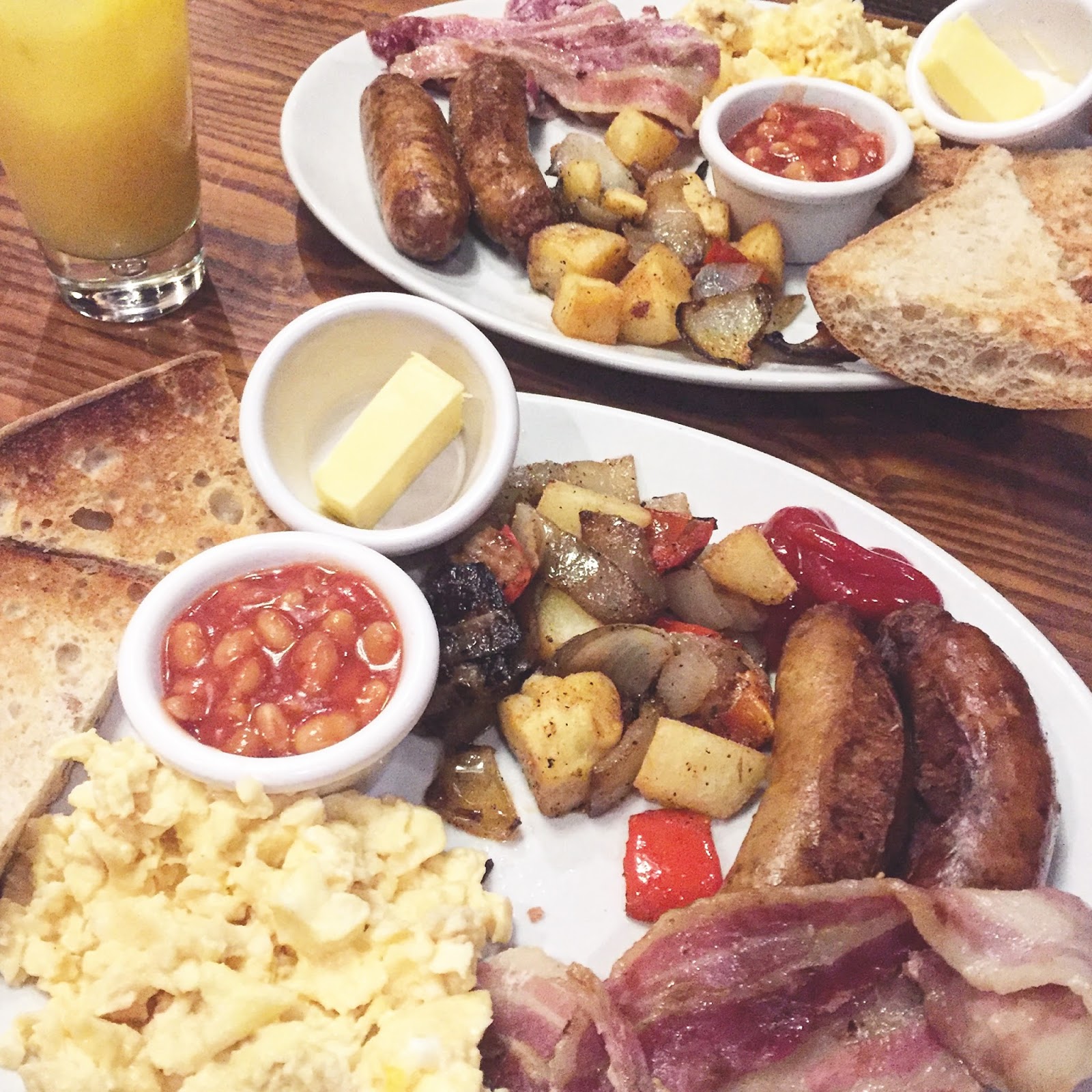 After fuelling up, Dan decided it would be a great idea for us to climb Arthur’s Seat. Yep, I’m dressed in a posh, fluffy coat and a pair of converse and he thinks this would be a good time to climb a mountain. I made him promise that he’d buy me a pack of Scottish shortbread in exchange, and after a little (okay, a lot) of persuading, we headed along the Royal Mile to Holyrood Park.

It’s quite strange how the city is so well-built and then suddenly you feel like you’re in the Scottish wilderness. Holyrood Park is filled with beautiful lochs and towering slopes, with Arthur’s Seat being the highest point. There is also the Radical Road which winds around the Salisbury Crags mountain just in front of Arthur’s Seat, so we climbed that first (quite a steep climb!) before walking along a paved road around the side of the mountain, and to a grassy slope just by Dunsapie Loch. From here, you can make the ascent to Arthur’s Seat quite easily and the beautiful views awaiting you at the top. 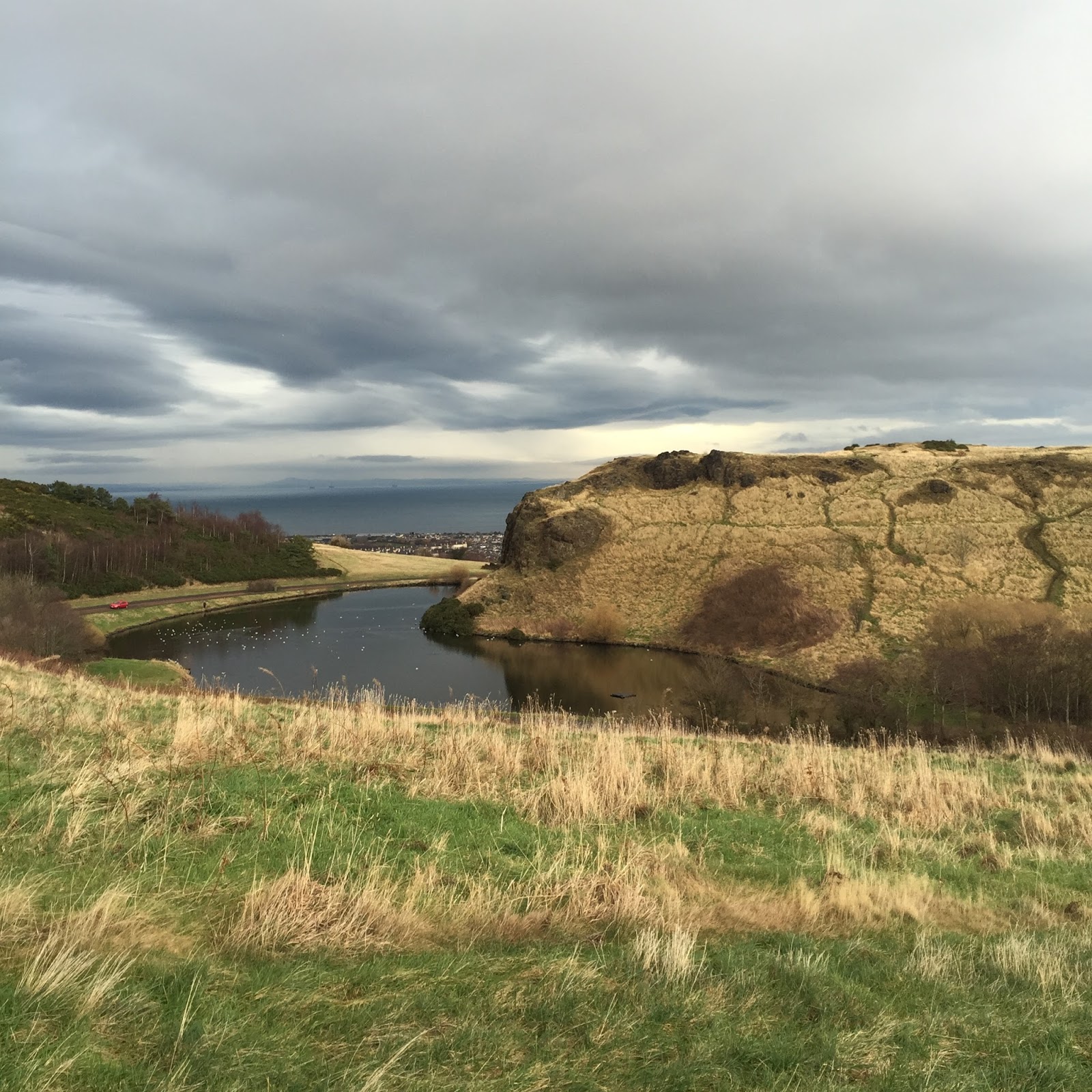 It’s a relatively quick climb to be honest. Heck, there were lots of people actually running up the mountain side to the top. And the views are most definitely worth it. At 250m above sea level, you can see a full cityscape and more, and I’m so glad Dan convinced me to climb. It has made me want to visit so much more of Scotland, and the world in general. I know I’m repeating myself, but being surrounded by beauty and experiencing it all with the one you love makes you want to just pack up your bags and travel the world for a year or two. 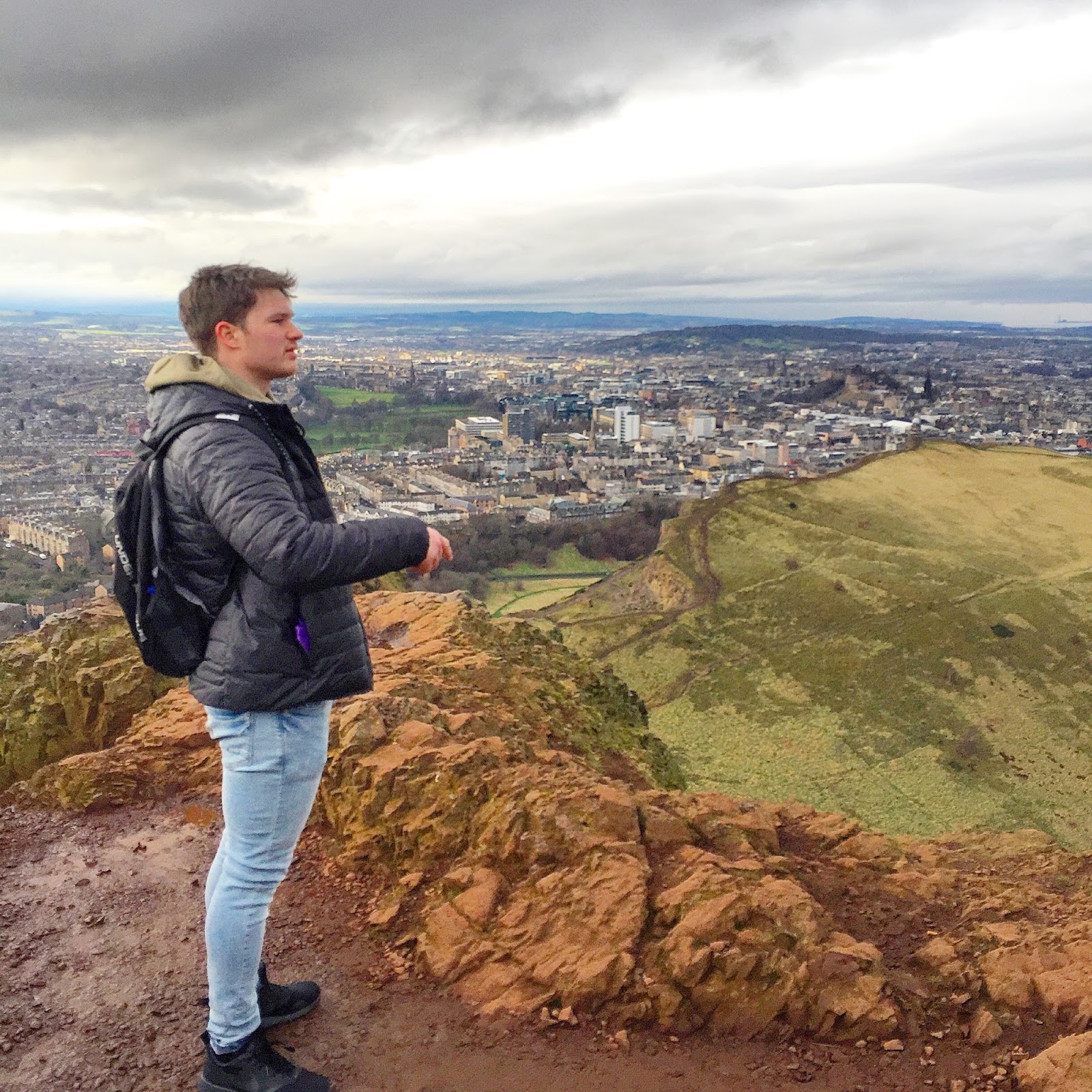 We finished the day with a feast in a pub on the way back to our hotel. Let’s just say, after hiking up three mountains/hills in two days, a massive slab of chocolate fudge cake and some gooey custard was more than deserved.

Our final day was spent wandering around the cobbled streets and heading on a bus tour around the outskirts of the city. There are three routes to choose from on Edinburgh’s guided bus tours, but we opted to visit the outer parts of the city as we’d covered the whole of the city centre on foot in the past two days. The city is pretty small which means you can see most of the sights by just walking aimlessly along the streets. There are lots of free guided walking tours, so you’re better off joining one of those instead of forking out for a bus tour. 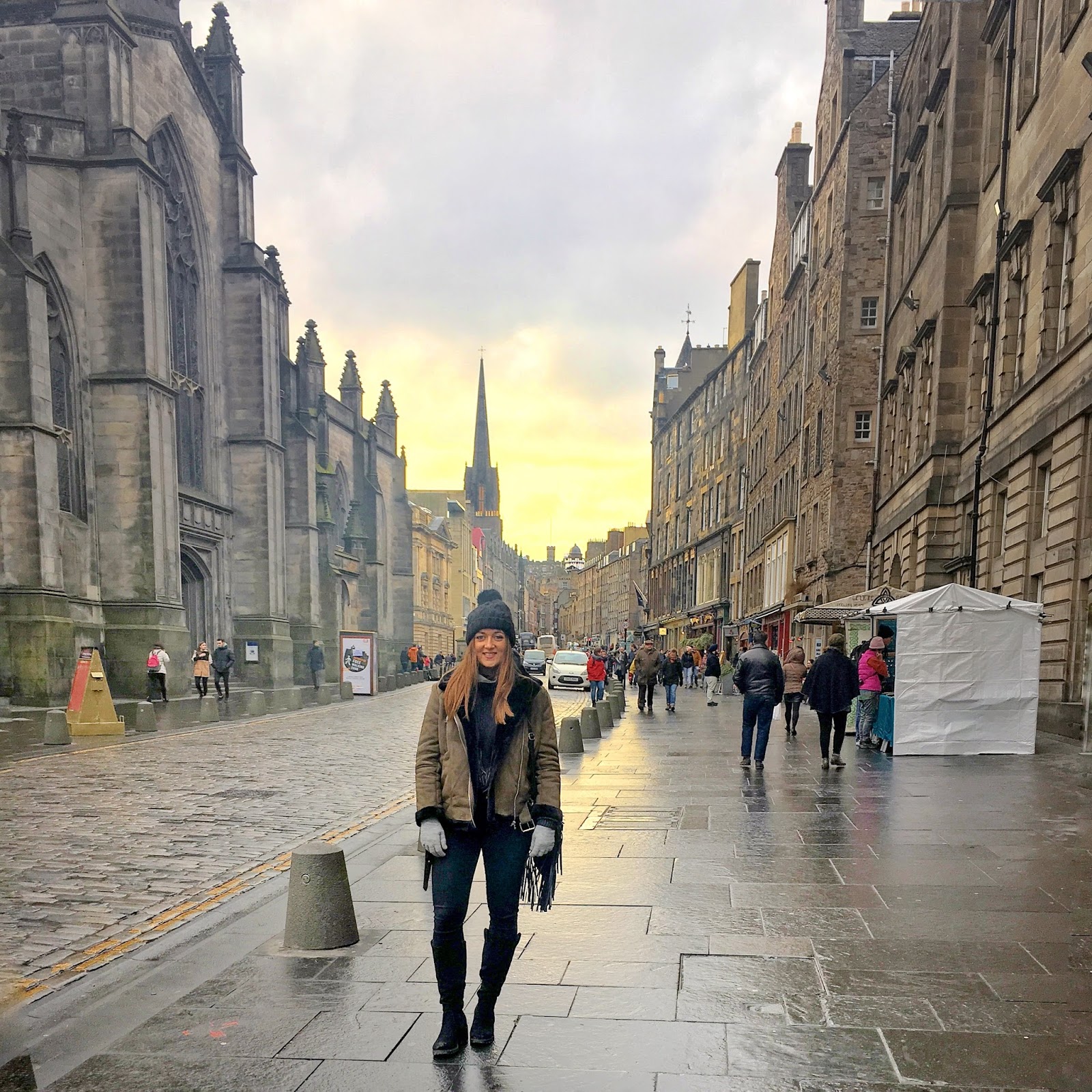 We did enjoy it and I particularly loved hearing about the history of the city. On our chosen route we went past the Royal Botanic Gardens, down to the docks and back through the city district of Leith. We stopped to take a look at Holyrood Palace and visit Scottish Parliament, but unless you’re planning on hopping on and off the bus all day, it’s probably not worth the price tag. Nevertheless, we got to see parts of Edinburgh we wouldn’t have if we were on foot, and got to understand the meanings behind each of the capital’s many monuments. 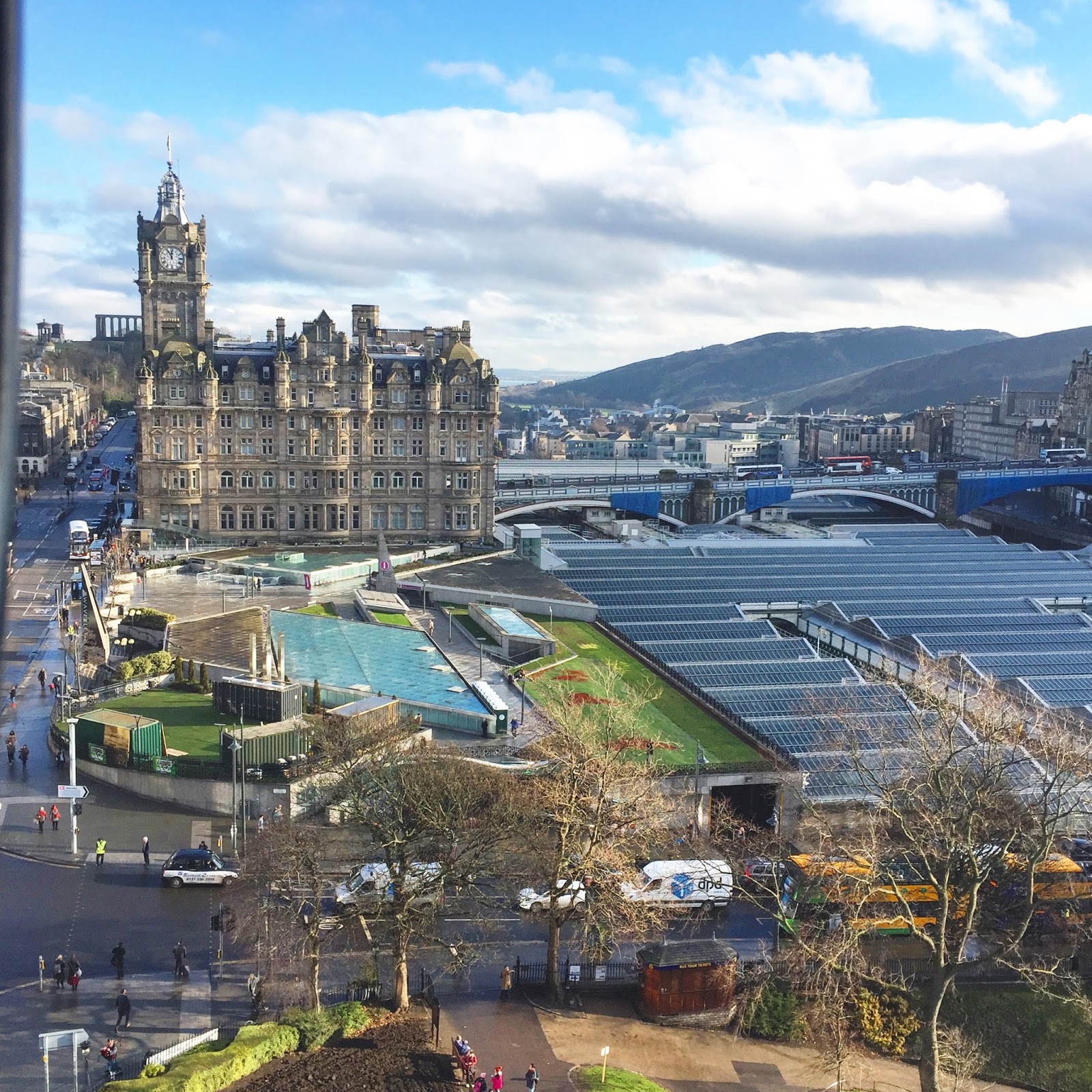 Speaking of monuments, for just £5 you can climb Scott Monument, for a 360 degree panoramic view right from the city centre. The monument was built to commemorate the great Scottish writer, Sir Walter Scott, and is situated right on Princes Street. There are four floors, all of which are reached by climbing narrow, winding, spiral staircases and one which is a museum. The views are stunning, even if you do feel a little queasy and your legs are shaking at the top. It also may be worth nothing that Dan could barely get his shoulders through the final staircase – these monuments are not built for guys (or gals) who lift weights!

All in all, Edinburgh was an absolute dream. Everyone is so lovely and kind, and the city itself is simply breathtaking. It’s small enough to get around on foot, but is rich with history and myth. You can totally understand where JK Rowling got her literary inspiration from, living in such a fantastically magical city, and I feel like it was a break I most definitely needed and more. I needed to escape reality for a little while, to refocus and recharge, and Edinburgh provided a peaceful haven, even in one of Scotland’s busiest cities. 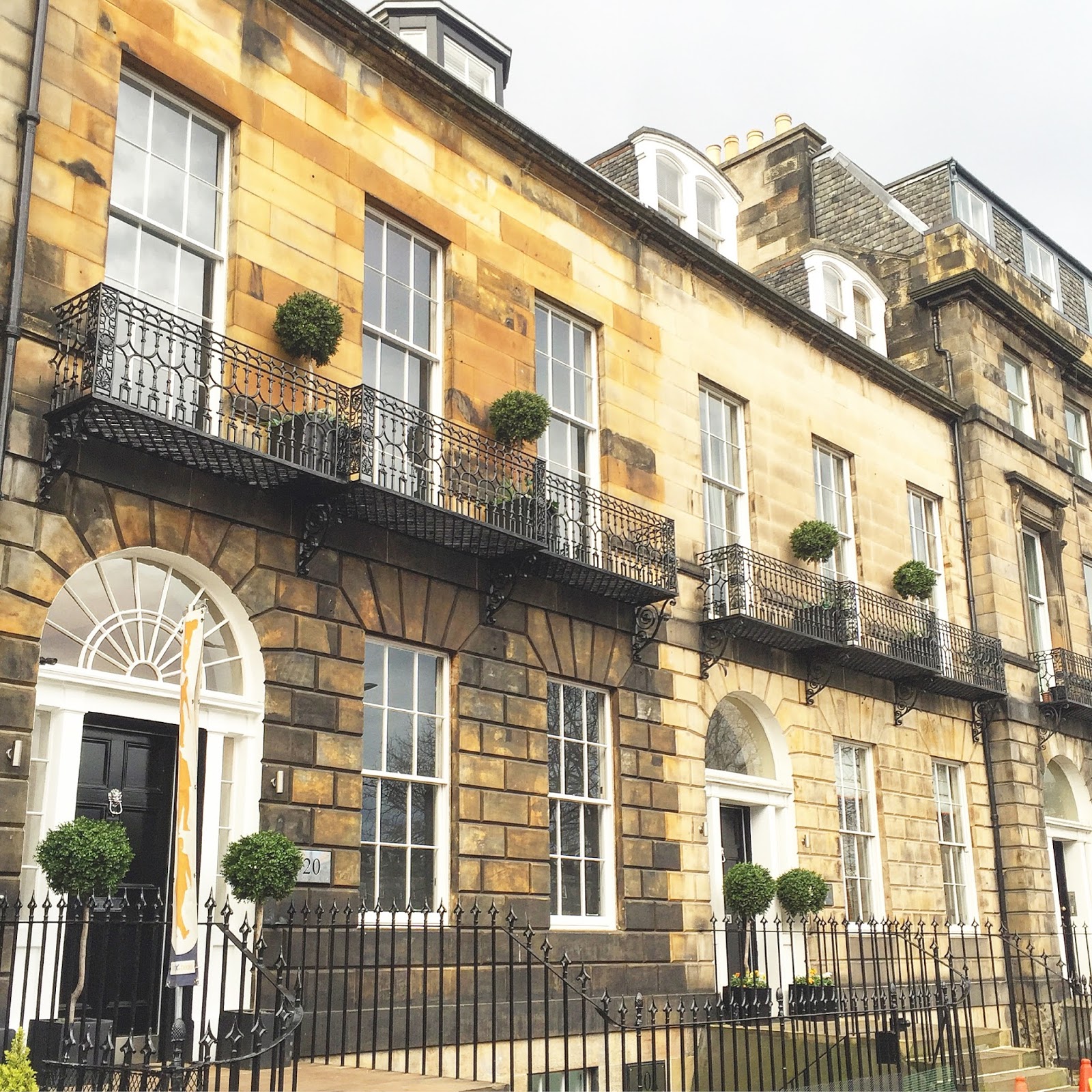 Edinburgh, you have my heart and have given me a taste of city breaks like no other. If you’re wanting to visit a city that is small, compact but heaped with things to do, then I urge you to go. It’s absolutely beautiful and I can guarantee you’ll come back feeling completely refreshed, with a mind full of memories and an Insta-feed full of beautiful photographs.