There’s nothing I love more than stepping on a plane and jetting off for a week in the sunshine. Basking in the sun’s rays, watching glorious sunsets, visiting and experiencing new places and cultures. For me, holidays are the perfect chance to get away from it all; a chance to catch up on yourself and a chance to take time out from the hectic schedules of everyday life and to relax and rejuvenate. After a seriously crazy year studying for my MA Journalism, last week I handed in my thesis (read about it here) and then flew off to Rhodes with my mum for a week of sun, sea and serious chill time. 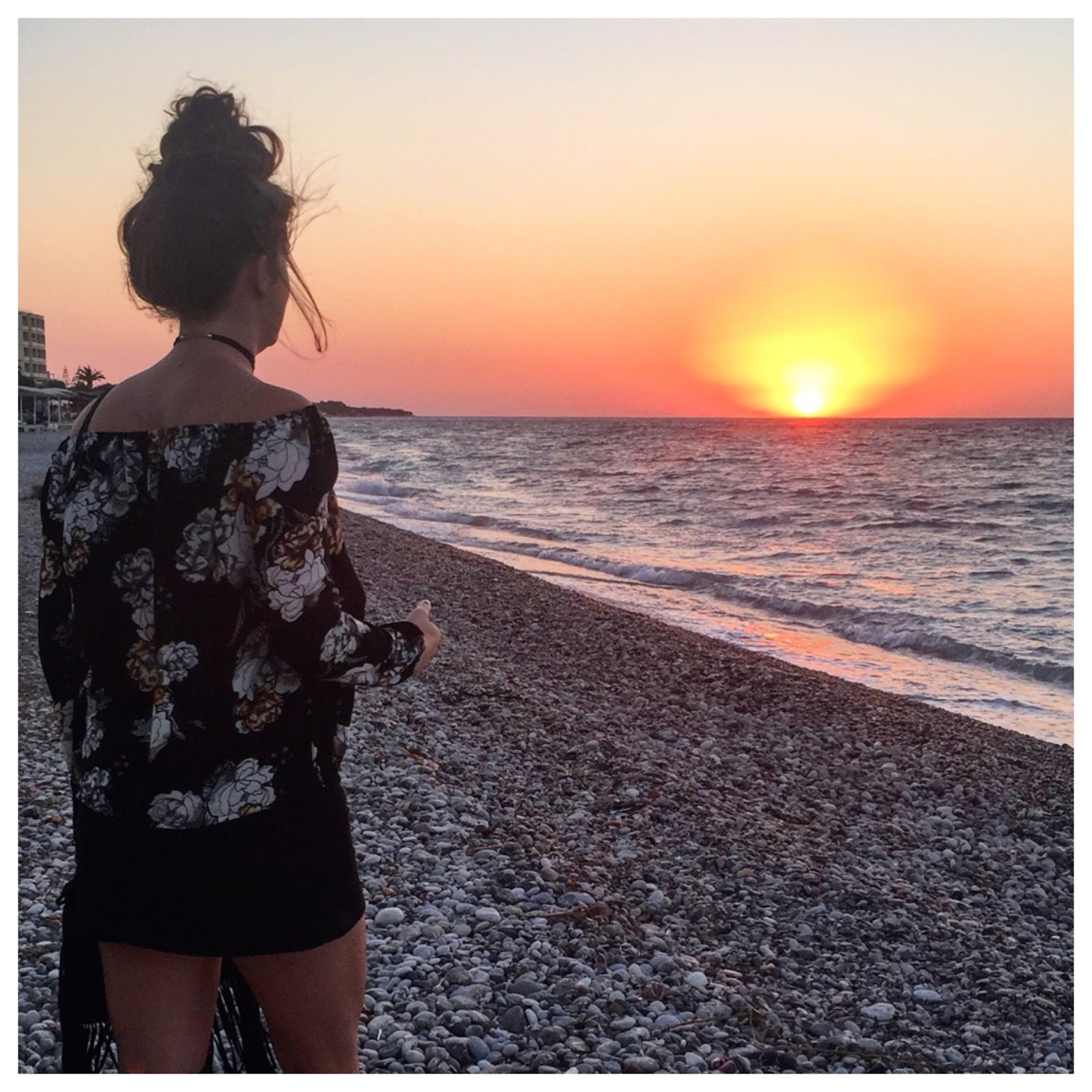 I absolutely love Greece. It’s without a doubt my favourite country of the ones I’ve visited, and I was so excited to head to the beautiful island of Rhodes. The Greek people, their culture and, of course, their delicious food really are fabulous, and I was so looking forward to spending a week taking it all in and, most importantly, relaxing. We stayed in the beachside resort of Ialyssos, a small village with a beautiful shoreline and lots of little cafes and shops, about a 20 minute bus ride from the island’s central city of Rhodos. 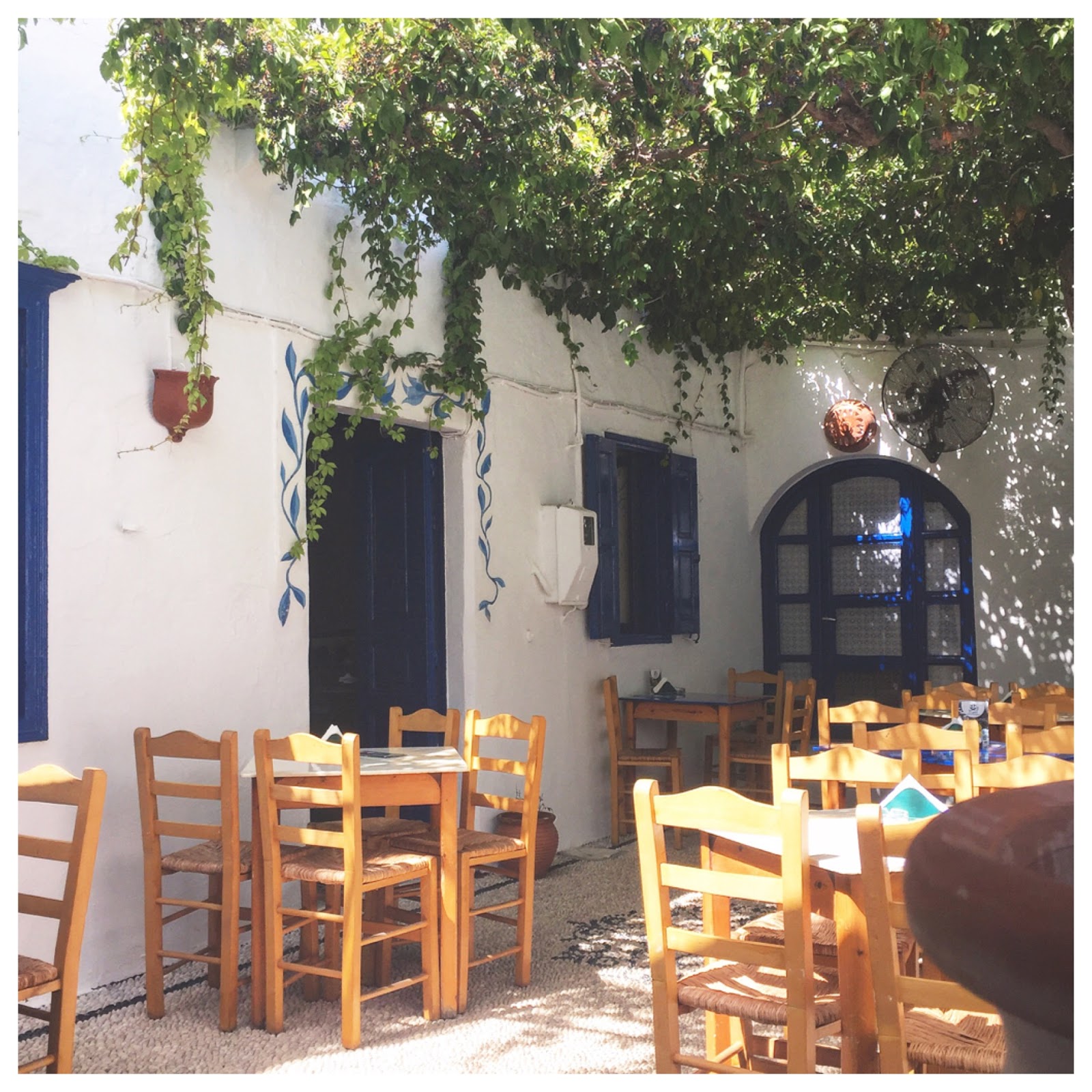 Days were mostly spent relaxing by the pool, going for little walks along the sea, taking part in the hotel’s activities (which included aqua gym and beachside sunset yoga!) and eating, of course. I honestly felt like I was waddling around like a baby seal by the end of the holiday, but I kept eating anyway. Greek food is too good to say no to! 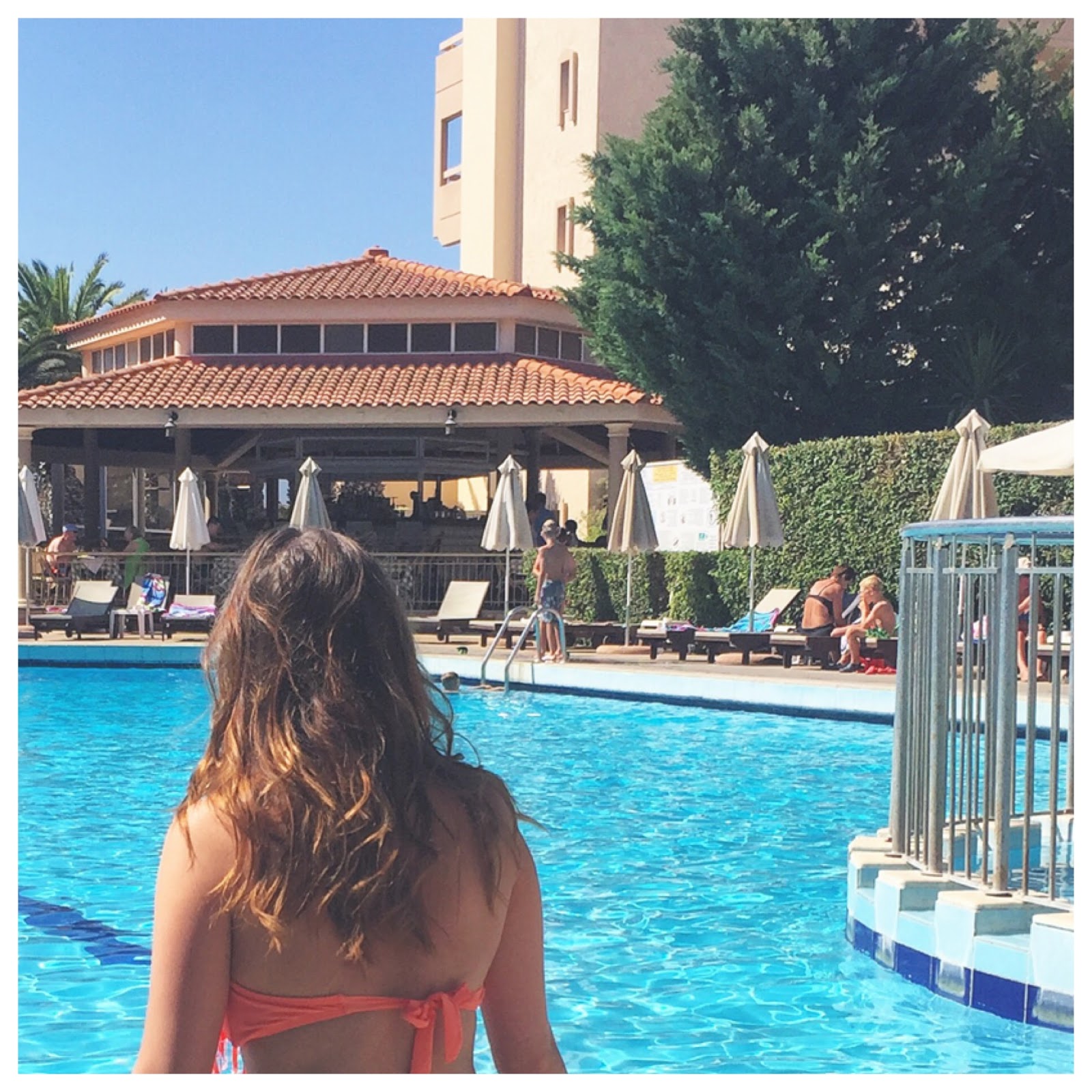 The hotel was in the most perfect location, with a beautiful pebble beach on its back doorstep and stunning views of the Aegean sea. The water was so clear and so blue, and on the horizon you could make out the craggy mountains of Turkey. Being on the West side of the island also meant we saw the most breathtaking sunsets. You could actually see the sun slip away behind the sea. For me this is one of the world’s most amazing features, and always makes me feel all warm and fuzzy inside. 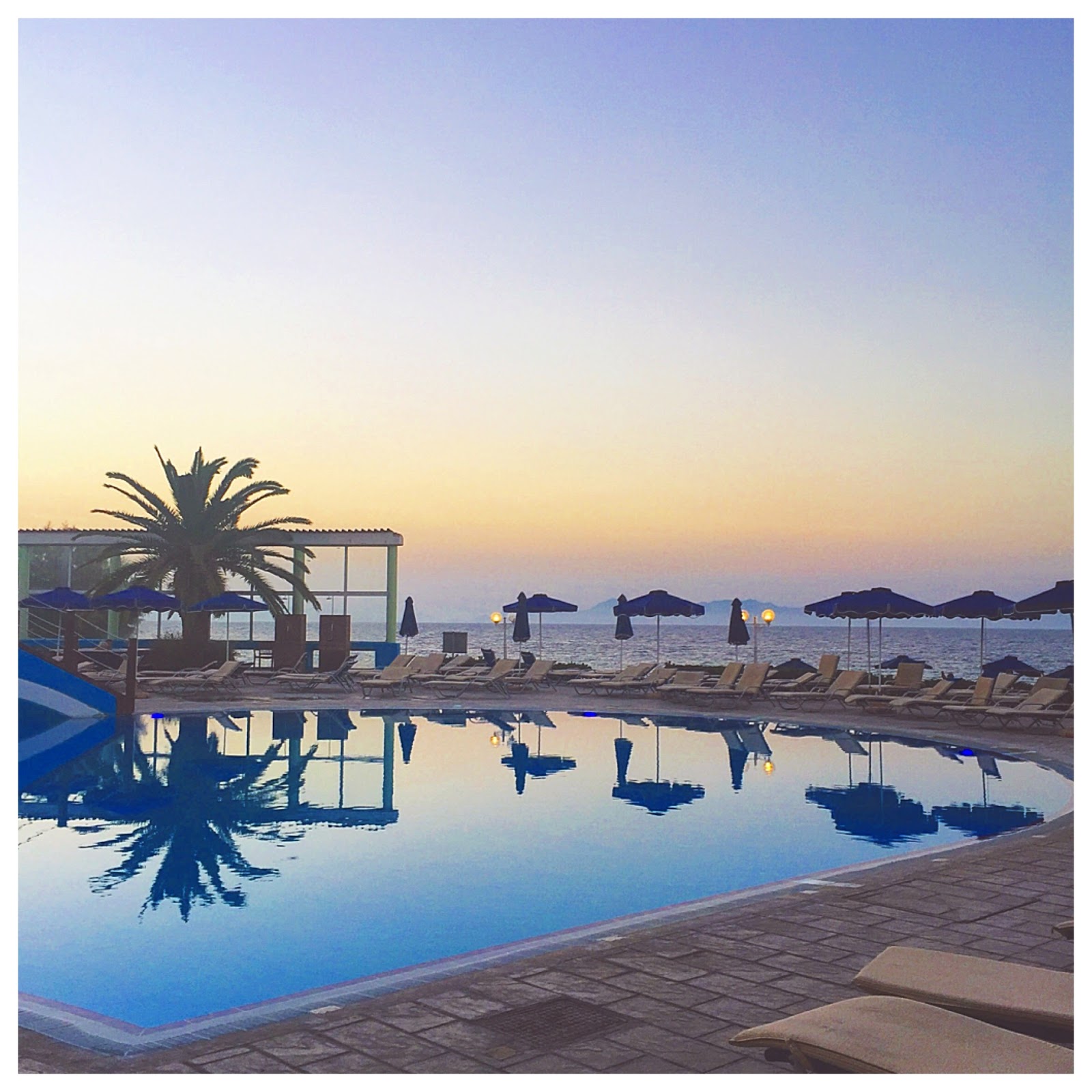 When we weren’t lazing around on poolside, we were out exploring the island and my favourite place we visited was Lindos. This striking village is situated on the South-Eastern end of the island and is made up of winding cobbled streets, tiny cafes and quirky shops that spill down the cliffside towards the beautiful port and beaches below. It’s a really beautiful setting and feels so typically Greek. 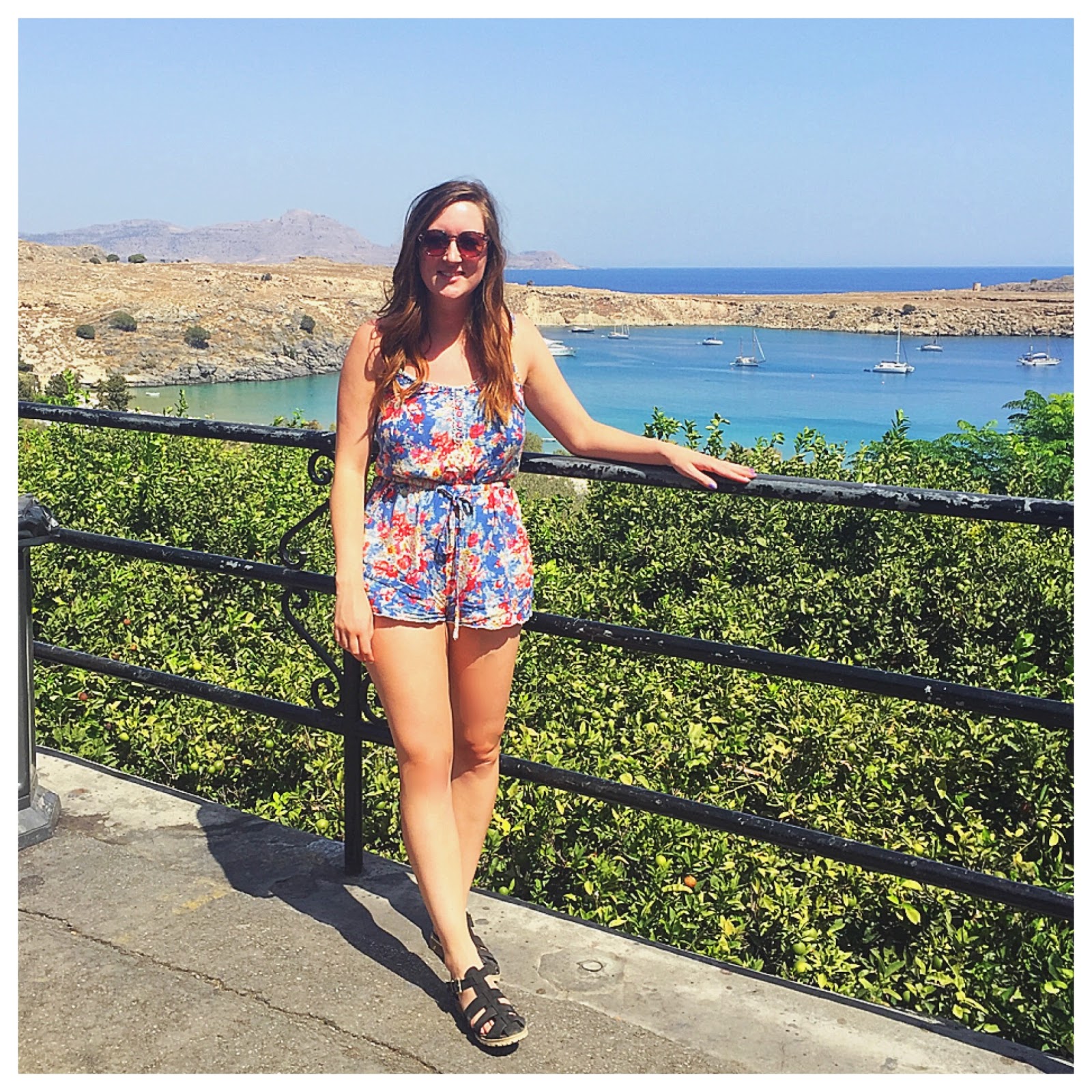 We visited in the day time and there was a real buzz there, with people milling in and out of shops, taking photographs of the beautiful architecture and the village’s donkey taxi service (though this made me feel sad for the poor donkeys who have to cart grown men up and down the hillside each day), and visiting the archeological site that is the Acropolis. 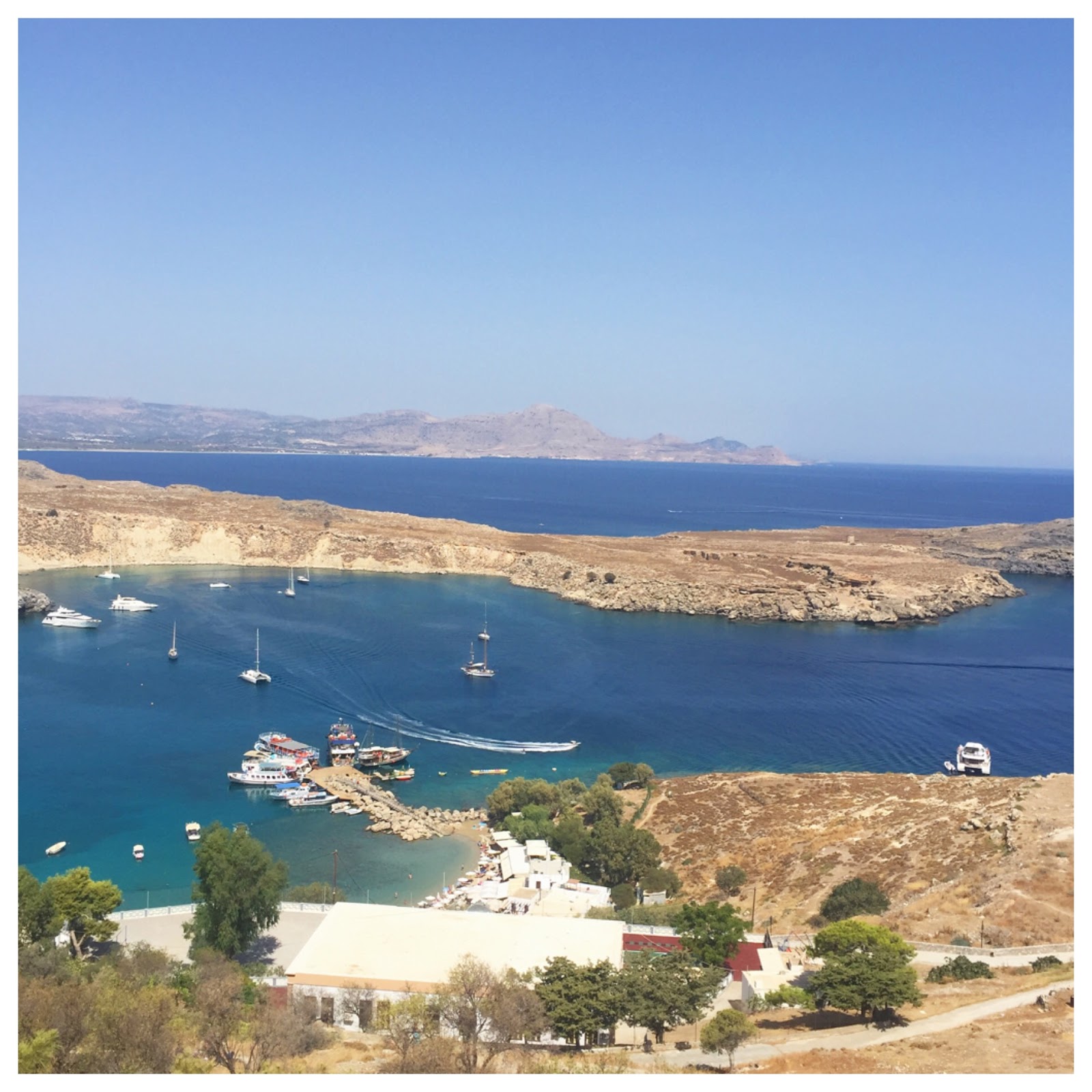 The Acropolis is a stunning ancient fortress that was built originally by the Greeks, and was fostered also by the Romans, the Byzantines and the Ottomans. It is built high on a cliff up above the village and is accessible either via donkey or by climbing 370 steps to the top. We walked up in the blazing heat and the views from the summit were outstanding. You could also see St. Paul’s Bay, which is almost like a lagoon on the other side of Lindos that poses the perfect location to tie the knot! You have to pay 12€ each to go into the Acropolis, which has doubled since the Greek financial crisis, but the views are spectacular and if you’re a history nut you’ll love it, as you can see lots of fossils and artefacts built into the dusty rock. It’s so amazing to think of the history and how this place would have been used in the past. 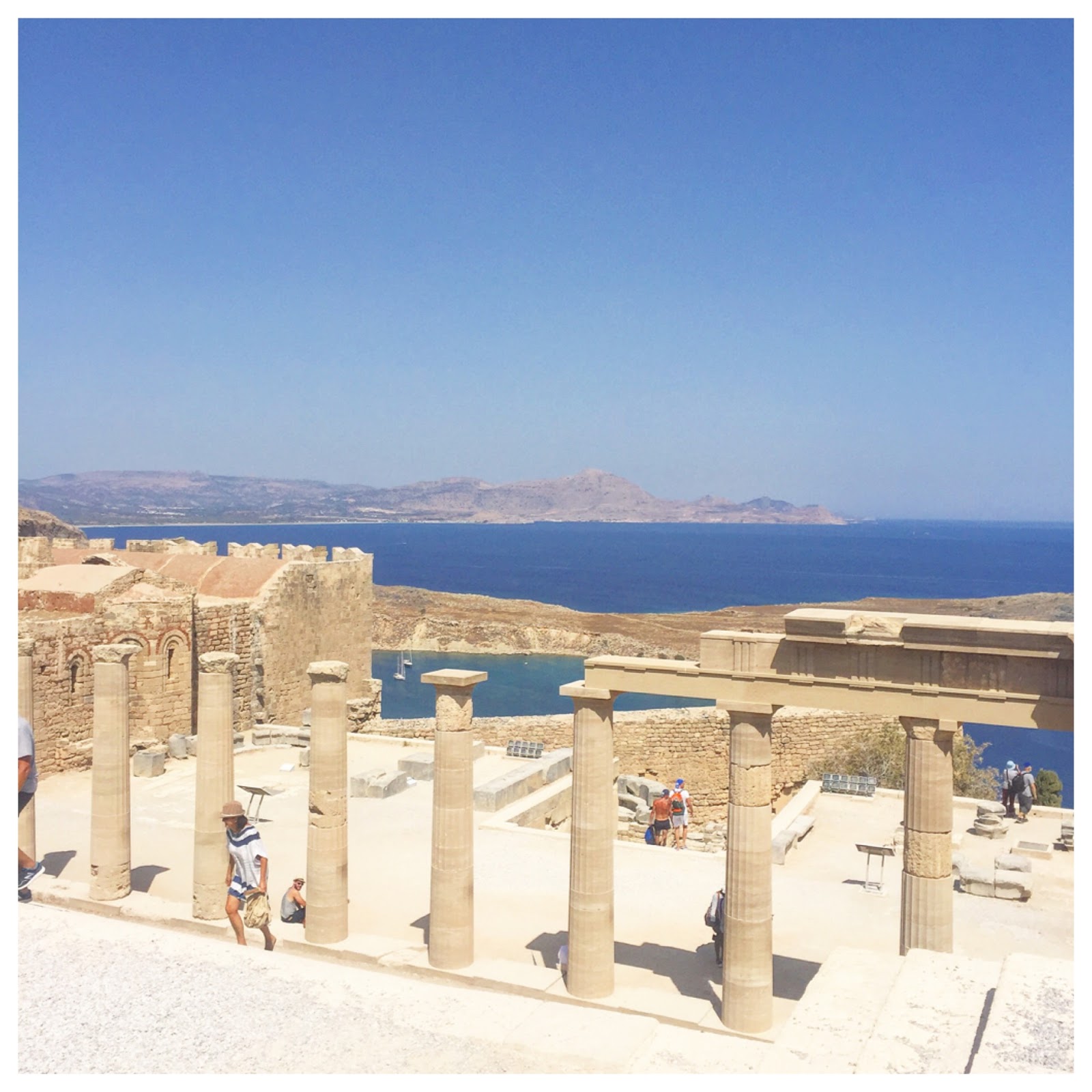 We also visited Rhodos Town one evening to do some shopping and to visit the old, walled city and grab some dinner. We started by going for a stroll along the harbour, which was something that Ialyssos was missing. I don’t know why, but I find harbours so relaxing. The calm water with yachts and boats bobbing on the waves; it really calms me and it was so nice to walk along there as the sun was setting and take in all the scenery. 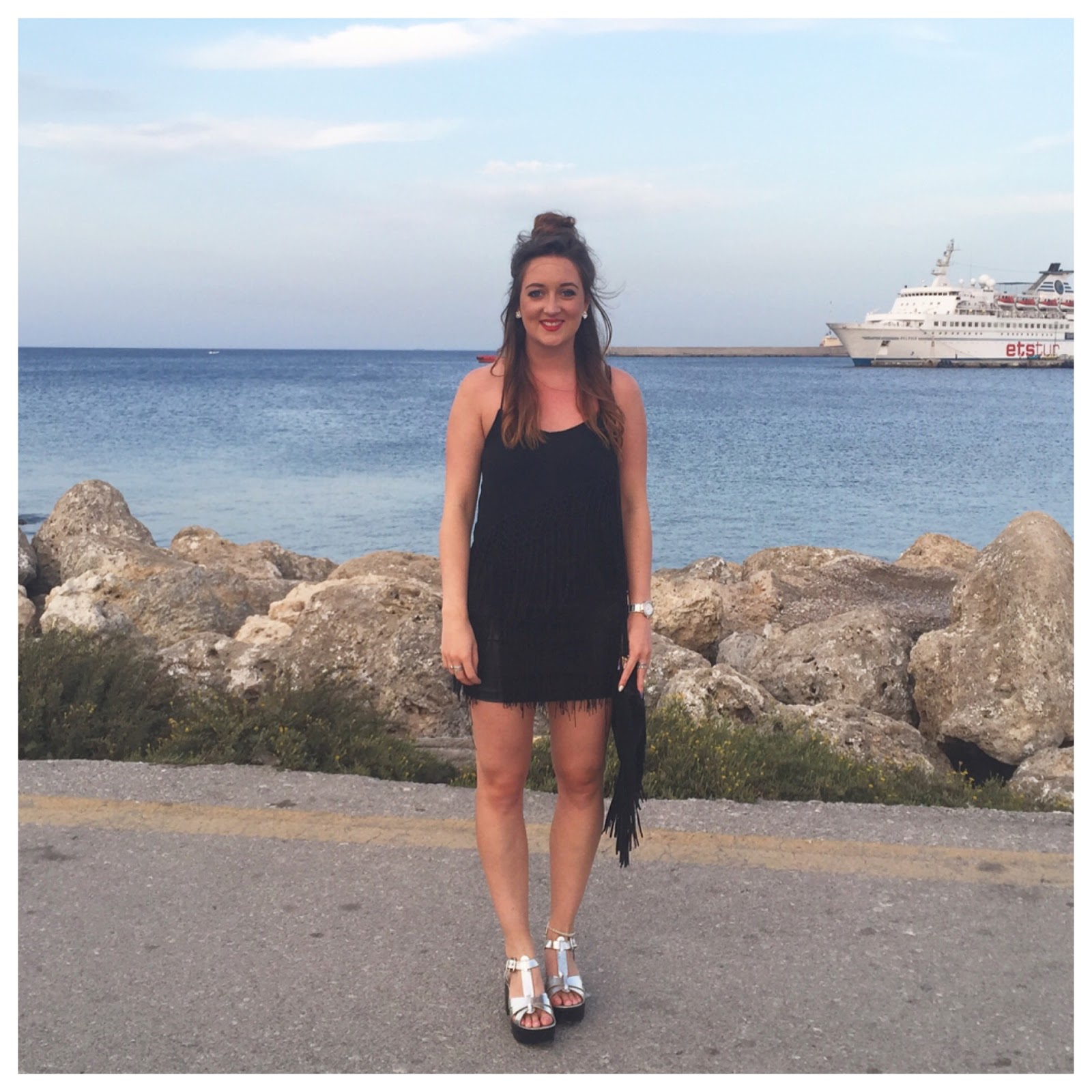 After a walk along the harbour we headed into the old city of Rhodes Town. The town itself is made up of two parts that are so completely different. On the one hand you have the metropolitan city, with large designer shops, big restaurants and scenes you would typically find in any European city. On the other, you have the walled city, which is made up of cobble lanes, huge fortresses and towers standing proudly amongst the bazaars and cafes which spill out onto the streets. Here the atmosphere is calm and serene. There are no cars, just lots of people, cats and beautiful architecture, giving an insight into the Rhodes of the past. It was here that we opted to grab dinner and we sat in a beautiful rooftop restaurant overlooking the walled city and eating scrumptious pizza. Seriously, bliss! 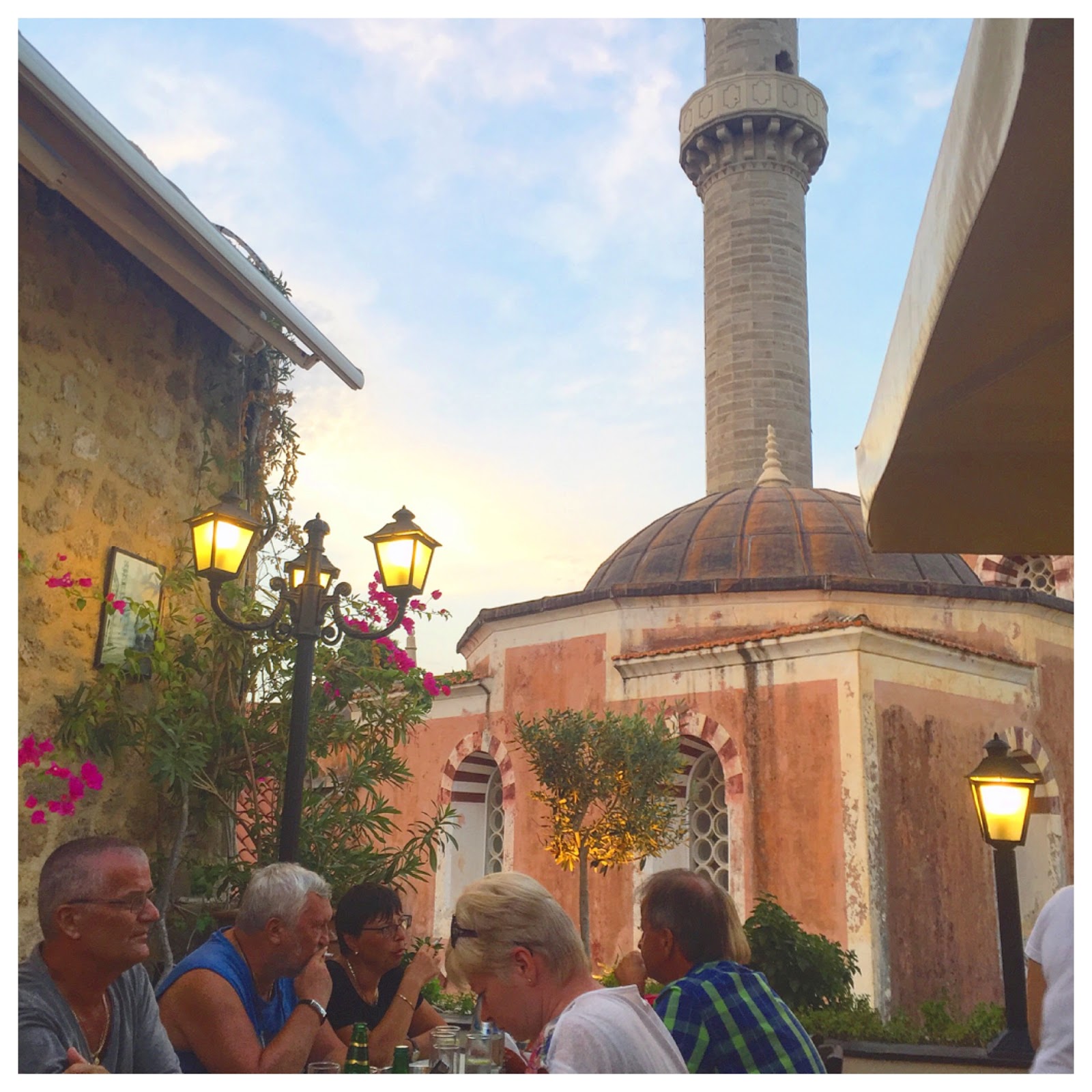 My week in Rhodes taught me a lot of things. Firstly, that life is too short to spend time worrying and waiting for things to happen. I spoke to a lady on the poolside who told me that the reason she was on holiday with her family was because her brother had terminal cancer. It really put things into perspective and made me incredibly grateful to have health and happiness, and determined to make the very most of life and every opportunity. 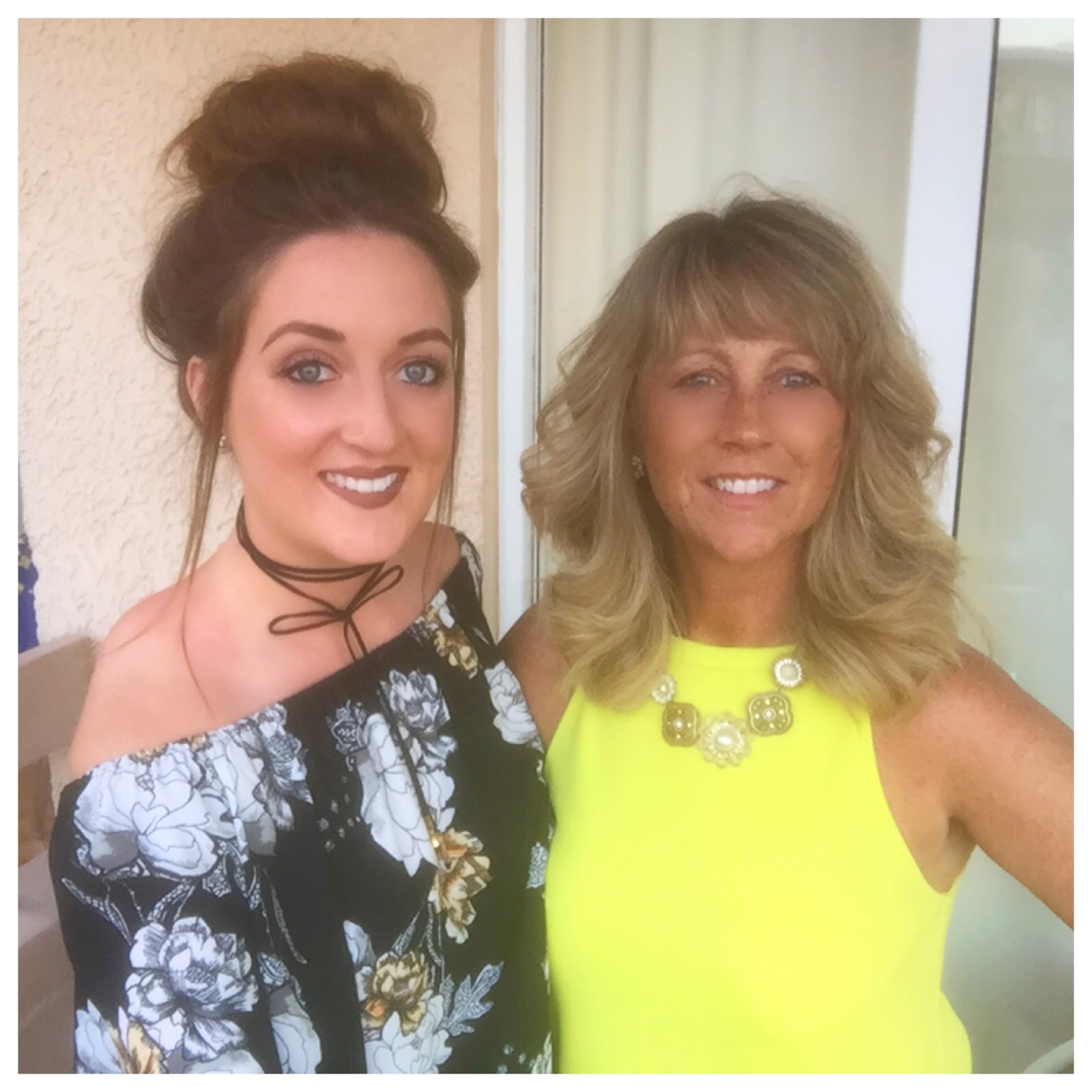 Secondly, it made me thankful for the opportunities that I have already been afforded with. A Greek lady we made friends with told us of how difficult life was for Greek people currently, as they are struggling to make ends meet due to the financial crisis. They work for hours on end in the summer months just to see the winter through, and she also told me how her son was currently undertaking nine months military service – something which all Greek men have no choice but to do or else face jail time or hefty fines and a lack of future work. It made me very thankful that I have the opportunity to choose my own path in life. 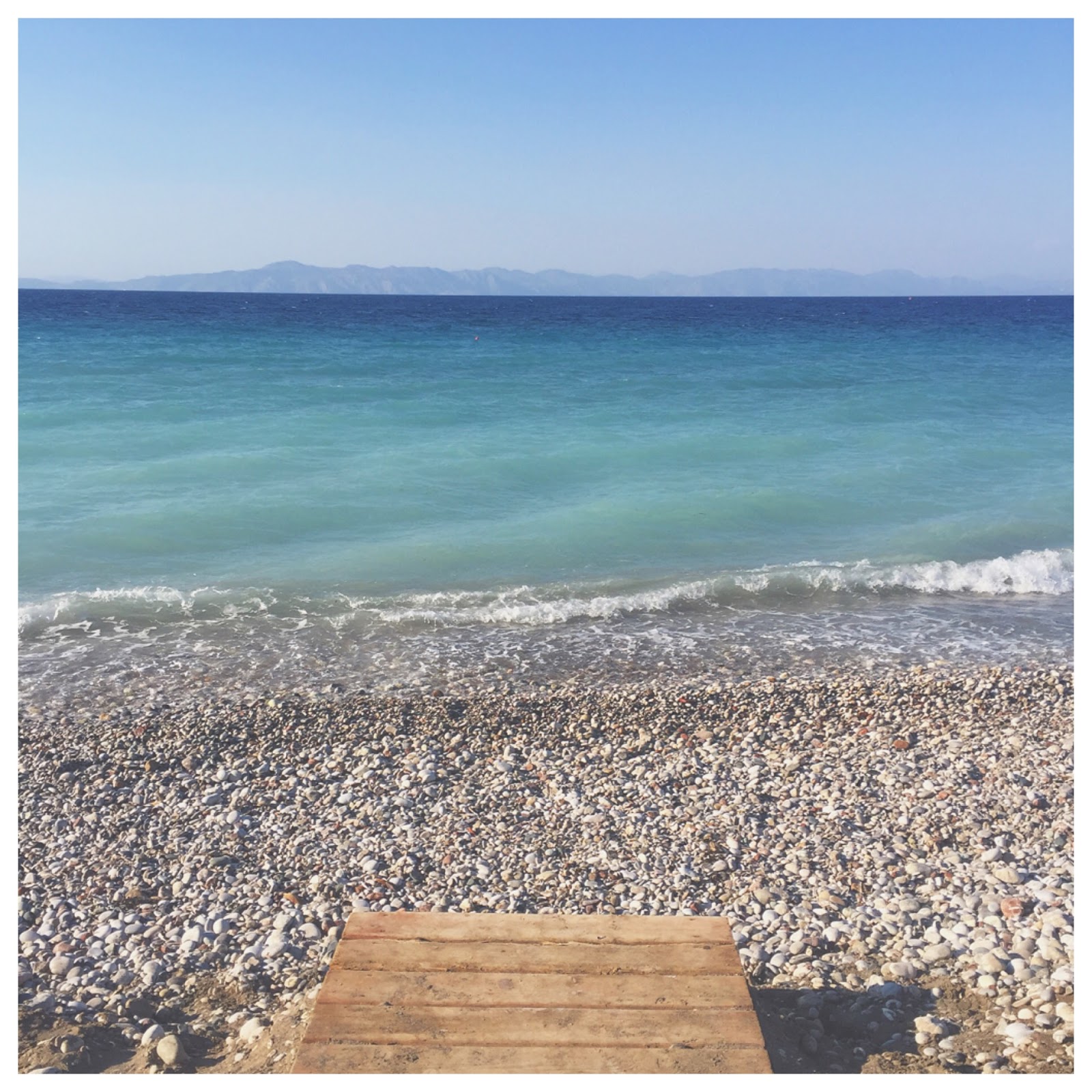 As well as being a really insightful trip, it also provided the break I so very needed. I came to the realisation on the first day of our holiday that I actually wasn’t worried about anything. I actually thought to myself randomly “wow, I’m not worrying about anything today”. After planning life the past year around deadlines and constantly having work to do, or things to think about, it was so nice to just take time out to think about myself, and I’ve returned home feeling completely relaxed and ready to take on the next chapter of life – the job hunt! 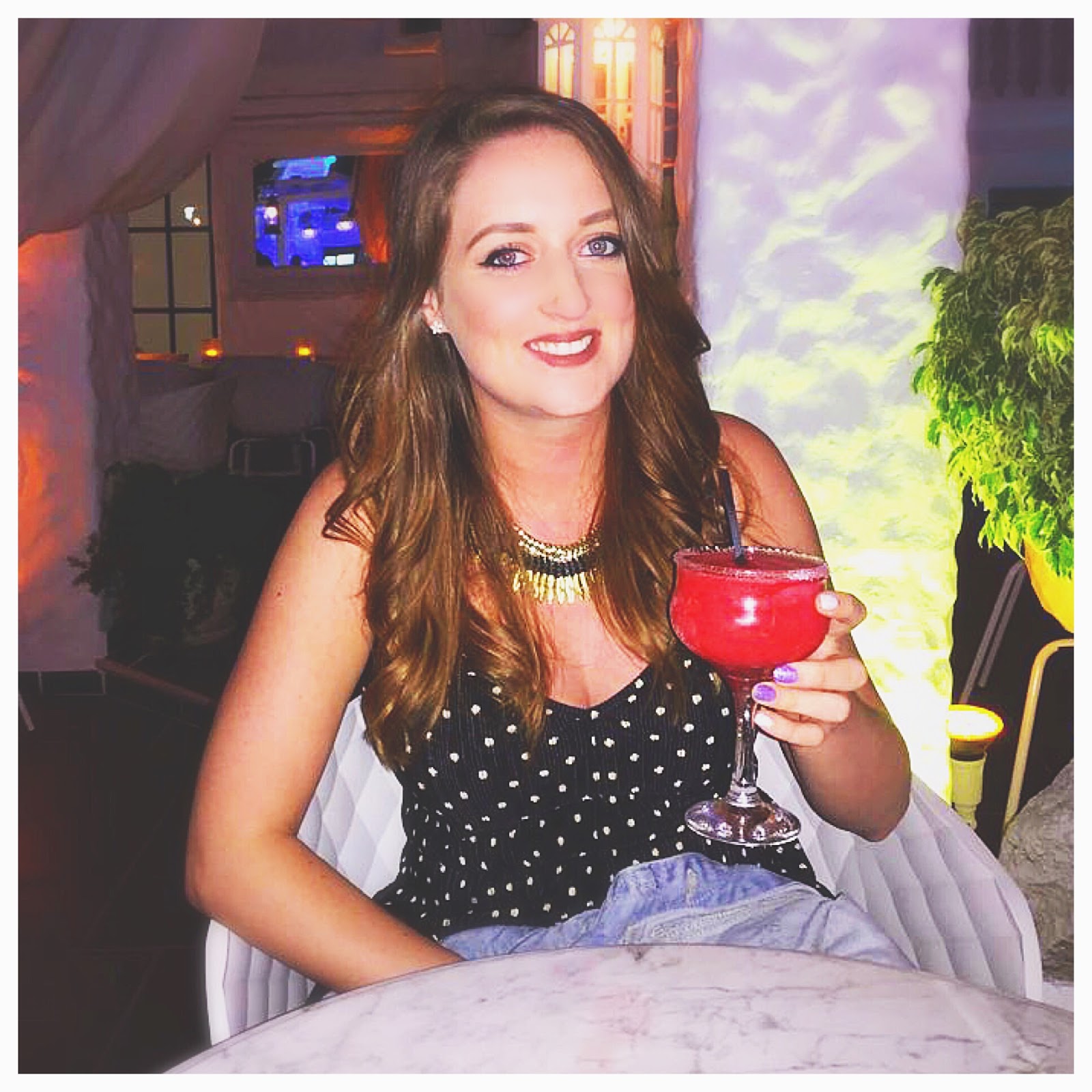 Rhodes really was the most wonderful experience, and I was really sad to say goodbye to such a beautiful island yesterday. For now though, it’s time to start taking steps toward obtaining my dream career and to continue thinking from this new perspective of being happy, carefree and remembering that I have my whole life ahead, and that everything will fall into place.