Another month has flown by and boy has it been an exciting one. We’re now officially in Autumn and the countdown to party season and Christmas has already begun (yep, I really did see a Christmas tree display in John Lewis). While September means the end of the year is near for many people, for me it always means new beginnings and this year was no exception as I started my Masters in Magazine Journalism at Cardiff University. I’ve only completed a week of inductions so far, and it looks like the year will intense but very exciting. I’m really looking forward to getting started properly at lectures today! See what I got up to in the lead up to the move back to Cardiff… 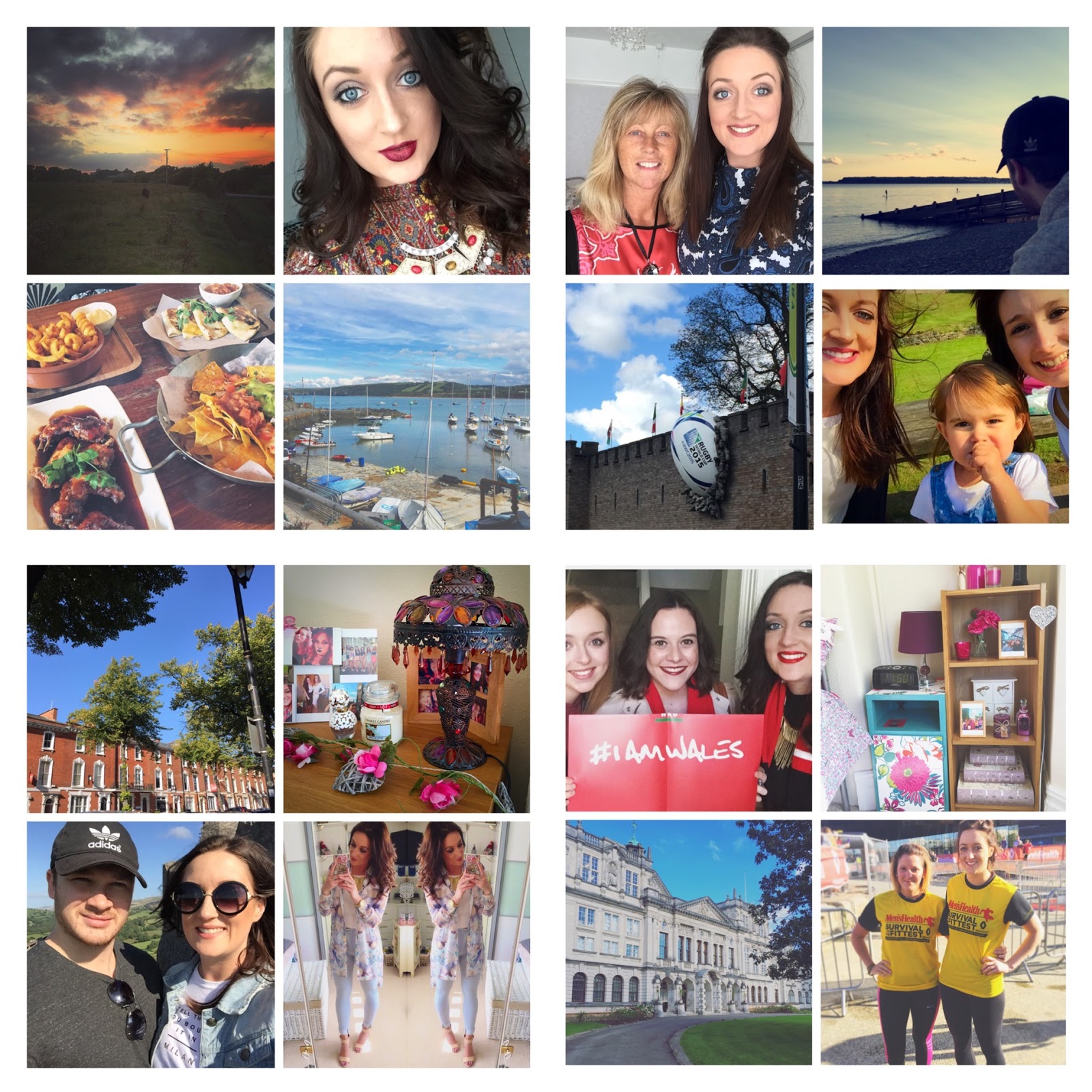 1. Spending time with friends and family.

As the summer came to a close I made sure I spent plenty of time with friends and family (and Dan, of course) before heading back to Cardiff. Dan and I went to a few of my favourite beaches and places in Wales to get my fix of the countryside before moving back to the city, and I went out for food and drinks with my friends on two different occasions which was lovely. It was really nice to get dressed up and to spend time with the girls as I probably won’t see most of them properly until Christmas time now. I also had days out with my mum and grandparents which was really lovely. Nothing beats family time.

I really do love this time of year. The changing seasons are my favourite and I love seeing the leaves falling off of the trees in a swirl of colours, and the nights drawing in. I really do think that this is the most beautiful time of year, and it’s actually been quite nice and sunny in the past week or so which means that walks in the crisp Autumn air and taking lots of photos are essential.

3. Moving back to Cardiff for my fourth year.

I was pretty nervous about moving back to Cardiff this year, as a lot of my friends have left Cardiff after university, I would be living with three people whom I’ve only met once or twice and I was worried that there would be a big step up from my undergraduate degree to a masters. While there is a big step up and I will have a huge workload, it’s all so exciting. My induction week was a whirlwind but there are so many new people to meet and so many exciting and amazing opportunities and tasks coming up that I’m feeling really motivated to get started! It’s also been lovely living with three new girls. We’ve all got on so well and I feel like these girls have exactly the same mindset as me which is ideal. I’m really looking forward to the year ahead!

You can’t live in Wales and not get caught up in the excitement of the Rugby World Cup – and living in Cardiff, even more so! The atmosphere on game days has been electric with everyone donning their red shirts and scarves to support the Welsh rugby team. A particular highlight of the month was watching the Wales vs. England match at a Cardiff pub with the whole crowd going crazy as the final whistle blew and Wales pipped England to the post with a 28-25 win. I think sporting events are great and really bring everyone together – even though I have no idea what’s going on on the rugby pitch half of the time.

I’m actually in a lot of pain writing this post as yesterday I completed Men’s Health Survival of the Fittest in Cardiff Bay. Twelve kilometres of running and fifty obstacles to cross – including monkey bars, travelators, white water rapids, hills and lots of climbing – means that today I am feeling the effects. Bruised legs, swollen knees, a massive bruise along my bum and my back and shoulders are in bits; it’s safe to say it really was a challenge, but I completed it along with my friend in 1 hour and forty minutes and we came in the top quarter of 4,000 runners, so I’m really pleased. I probably wouldn’t put myself through it again as it was really tough, and I just don’t think I’m built for climbing and wading through rapids, but the feeling of finishing was ecstatic and I’m really proud of myself having done it!

What did you get up to in September?