Hey guys, really sorry I haven’t posted in a while. It’s been a manic mix of nights out, uni work, part time work and seeing a psychic this week – the last of which was very interesting! But today I’m back with another review, this time of Rimmel Wake Me Up Foundation, which I bought in one of my recent hauls.. Having used this for a trial period of almost 3 weeks to see how I truly felt about the foundation, I feel it is now time to give a review.

I had hear wonderful things about this foundation, and after my bareMineral’s ran out (sad times!) I headed to Boots to take advantage of the 3-for-2 offer. Every beauty blogger who had reviewed this said amazing things about it, and I was eager to try it out so bought the True Ivory shade and gave it a go.

The foundation is described as giving an anti-fatigue effect and radiant glow something that really appealed to me. I needed a foundation that would help me look more awake and fresh after nights out in university or a late night of revising (if that ever happens, it hasn’t yet). It also says it gives an instant flawless, natural looking finish which I feel is extremely important in a foundation, as I have experienced foundations in the past that make you look patchy and uneven. 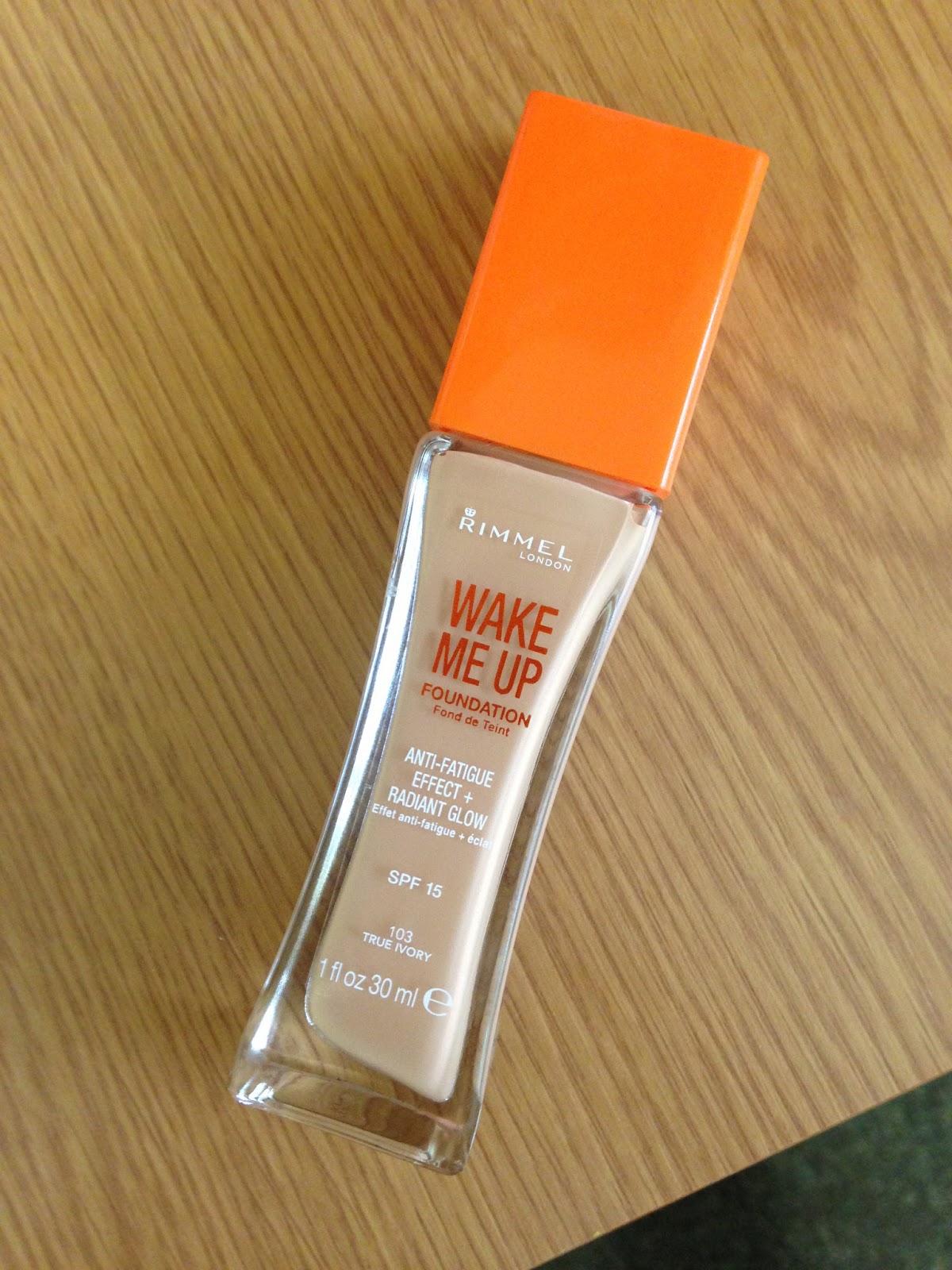 I applied the foundation with a brush and was impressed with the smoothness of it. It is quite a creamy texture and it felt really nice on the skin and the colour was a perfect shade for me. It gave very good coverage, even covering those tiny blemishes that tend to appear, and a nice even glow to my skin on my first impression. I then went about my daily business.

After a few hours of lectures I glanced in the mirror to look at the foundation, and was quite disappointed in what I saw. I found that my skin looked really oily and very shiny, particularly on my T-Zone. The foundation says that it gives a “natural glow” and I think on my combination skin, the glow went to another level. I practically looked like a light bulb shining about the place. I was rather disappointed to see this having heard so many good reviews.. And was hoping it would suit my skin type and become an every day foundation due to the price tag, as it is considerably less expensive than the foundation I had been wearing previously.

Although I was disappointed, I did persevere with the foundation as I was adamant it would be perfect for me after all the amazing reviews I had read. However, it never did look good on my skin. It would go on looking amazing, really glowing, and natural with an even coverage – and it feels so nice and creamy. But after a few hours of just sitting down or walking ten minutes to university, it would get really oily and greasy, and would feel almost slimy on my face. One day I even looked to find that I had black from my mascara underneath my eyes as though I had been sweating like a turkey at Christmas having done a 1.5km run in the gym – but I hadn’t even broken into a sweat! I had just been sitting down in a lecture theatre. Safe to say I was very embarrassed! I even tried using primers and powders to matify the foundation a little more, but this still didn’t work and if anything it made the foundation seem thicker and more creamier, resulting in even more shine.

So I would have to give a thumbs down to the Wake Me Up Foundation – and am probably one of the only beauty bloggers to do so. I was really gutted that this wasn’t my new turn to foundation, but it just really doesn’t suit my skin type. It would probably be ideal for girls with drier skin as it does moisturise, but it was just gave too much moisture to my already oily skin and it left my looking and feeling even more oily. It’s safe to say, I will be returning to my bareMineral’s favourite next week.

Have any of you guys tried this foundation? What are your thoughts?
Lots of love, Jessie. xoxo